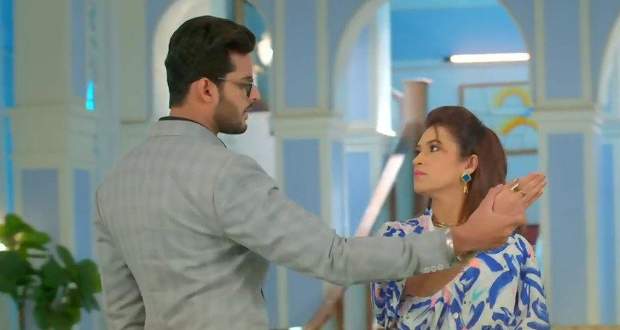 Today's Meet 13th July 2022 episode starts with Meet Ahlawat apologising to Manjiri for hiding in her room and asking her to not leave, but When Manjiri asks him why was he even there in the first place, Meet Ahlawat plays the recording of Manjiri saying that she can’t act anymore.

This freaks out Manjiri and Meet Ahlawat leaves her room.

The next day, Manjiri insists on making Poha for everyone but all the family members are concerned because they don’t want anything to go wrong today.

They all misunderstand her because of her accent and they think she’s talking about alcohol and not a dish.

Meet Ahlawat enters and he’s shocked to hear about this, so he goes to see Manjiri in the kitchen and scolds Manjiri for thinking of serving alcohol to Deep’s mother.

However, when Manjiri shows them a bowl of soaked Poha, they all realise that her accent confused them.

Ragini worries about what’s going to happen and she gets nervous, so Isha calls Deep but he doesn’t pick up.

Meanwhile, Manjiri goes to serve Poha to Raj and insists on making him taste the dish she made, which he really likes.

He really wants to go downstairs and meet Deep’s mother along with the family, but he requests Manjiri to be there instead and take care of everyone.

At the same time, Deep’s mother arrives in the car and has a fight with the cab driver about the fare of the ride.

Deep asks her mother to come inside with him because they’re already late, but she says that nobody respects the guests who arrive on time.

His mother asks him to go and get her medicines while she meets Isha’s family.

When he leaves, she thinks that she will never forgive the family who sent her son to jail, and she will take her revenge on them.

She enters their house while Ragini is saying that this marriage should be fixed anyhow today.

However, Deep’s mother says that this relationship would not be finalised today in any case and then introduces herself.

She tells them that a lot of mishappenings took place with her today and the sweets she brought for them are also ruined.

Telling them about the robbery that took place with her today, she says she did not want to come here after all that.

When Babita asks her if they can discuss the marriage, Deep’s mother refuses.