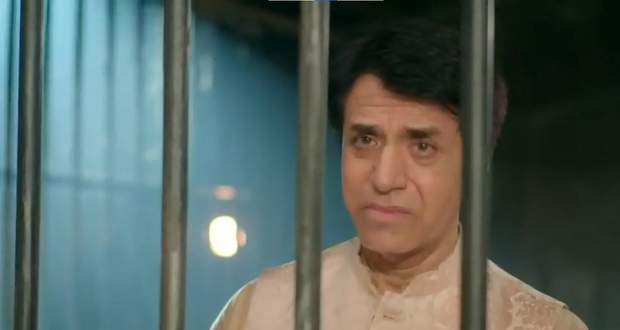 Today's Meet 13th May 2022 episode starts with Meet Hooda telling Raj that it is a crime to give a false statement to the police and says that she can't believe he tried to separate two people who love each other.

However, Raj says that he will again write a statement and will give it to another police officer while Meet Hooda says that she will prove his innocence by catching the real killer anyhow.

Back at the Ahlawat mansion, the whole family gets concerned seeing Ram being numb to their shouts and his surroundings.

At the police station, Meet Hooda promises Raj that she won't leave him alone at night.

Elsewhere, Isha tries to take her phone from Shantanu but he scolds her while she says that she will tell the police that Raj didn't kill Ashok.

However, Abhay manages to manipulate her into thinking that she and Ram will be arrested for hiding the truth.

The next morning, Meet Hooda returns to the Ahlawat mansion but is stopped by Meet Ahlawat at the front door.

Meet Ahlawat tells Meet Hooda to leave the house before he has to forcefully kick her out and throw her suitcases on the floor.

However, Meet Hooda says that she won't go anywhere as it is her right to stay in her in-laws' house.

Being agitated by her response, Meet Ahlawat tells Meet Hooda that she can stay in the house only if she resigns from her post at the police station.

Without saying a word, Meet Hooda writes in the paper that she won't leave the house and further rebukes the family.

She questions Meet Ahlawat why she is the one who always had to give Agni Pariksha and reminds them of all she had to do since her marriage.

Responding to Meet Ahlawat, Meet Hooda states to not think of her as an ornament and enters the house.

Stopping Meet Hooda, Babita says that she will never be respected by the family members ever again and orders her to not talk to her.

Later, Meet goes to her room and has a breakdown.

© Copyright tellybest.com, 2022, 2023. All Rights Reserved. Unauthorized use and/or duplication of any material from tellybest.com without written permission is strictly prohibited.
Cached Saved on: Wednesday 25th of January 2023 08:08:07 PMCached Disp on: Sunday 5th of February 2023 01:33:01 PM