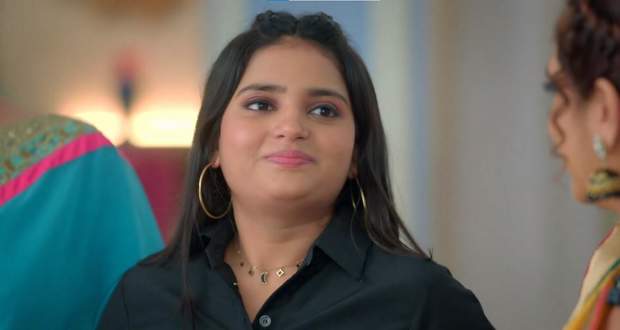 Today's Meet 14th July 2022 episode starts with Deep’s mother saying that the discussion on marriage won’t proceed until she talks to the pandit about the bad omens.

When nobody replies about contacting the pandit, Deep’s mother threatens to leave.

So she calls the pandit up and he suggests taking gold from the bride’s family as a gift.

Ragini’s mother thinks of giving her bangles to Deep's mother, but Manjiri interrupts her.

Manjiri asks if Deep’s mother’s jewellery had some precious stones attached to it, and Deep’s mother asks her how did she come to know about that.

Manjiri then tells her that she found a necklace on the same road on which Deep’s mother was robbed and brings that to her.

While inspecting the necklace, Deep’s mother tells Manjiri to not fool her with a false necklace but Manjiri says that even the story of the robbery is fake because the road on which the robbery took place has been closed due to rain.

This shocks the family members and Deep’s mother accuses Manjiri of shaming her in front of everyone.

Barfi Devi (Deep’s mother) asks everyone who Manjiri is and Meet Ahlawat tells her the entire story.

Saying that she’ll only talk to the family members about the marriage, she tells everyone to make Manjiri leave the house.

Meet Ahlawat grabs Manjiri’s hand to drag her away from the room but Manjiri refuses to go and says that Barfi Devi is just playing with them.

Meet Ahlawat tells her she’s not a real part of the family and that she should not interfere in family matters.

Barfi Devi taunts everyone for keeping Manjiri in their house and says that she wants to leave.

She takes the packet of sweets she brought and throws it on the floor before leaving the house.

Ragini tries to stop her and offers Barfi Devi her gold bangles to settle things.

Barfi Devi tells them that she doesn’t like Isha but she’ll reconsider the offer.

At that time, Deep arrives and asks to see Isha once but Barfi Devi refuses and they both leave.

Meanwhile, Raj asks Babita if everyone went smoothly and Isha’s parents say that all went good.