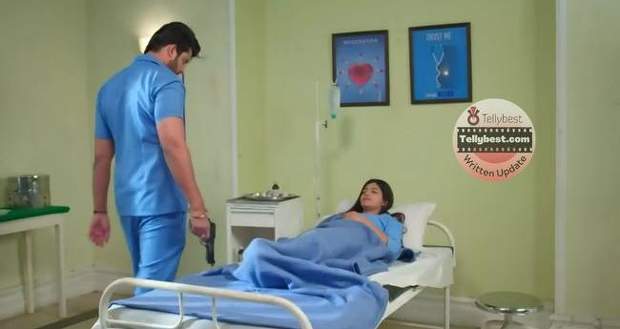 Today's Meet 16th December 2022 episode starts with Barfi Devi telling Meet Hooda and Meet Ahlawat that the house will be theirs soon but first they should enjoy the party she is hosting for them.

Meanwhile, Barfi Devi goes to check on the dancers and gets shocked to see Masoom and Ishani in the dancers' place.

Barfi Devi praises the lady who brought them and tells her that she will give her double the money if the girls dance with whole energy.

Ishani and Masoom start dancing while Meet Hooda tells Meet Ahlawat that they need to do something before Raj and Babita see them dancing as they will be shattered if they see Masoom and Ishani dancing.

Just then, Raj and Babita come there and get shocked to see Ishani and Masoom dancing while drunken men surround them with money in their hands.

Just then, the police come there and stop everything while Masoom and Ishani reveal that they were blackmailed to dance there or else Chhaya will circulate their pictures of taking money from her.

The police tell Barfi Devi that she is under arrest while Barfi Devi takes the police officer aside and bribes him after which she grabs Babita by her hair and asks her if she called the police.

Raj tells Barfi Devi to not cross the limit while Barfi Devi brings in a whip and is about to use it on Babita when Meet Ahlawat stops her.

Barfi Devi falls to the ground while Meet Ahlawat reveals his identity along with Meet Hooda.

Meet Hooda raises the whip to lash Barfi Devi and stops at the last minute telling Barfi Devi that they are not like her.

Further, Meet Ahlawat gets angry at Masoom for falling for their trap while Raj argues that she was just trying to help the family like he was.

Meet Ahlawat turns to Raj and tells him that he did wrong by hiding that they were working at the Ahlawat house as servants which they build with their blood sweat and tears.

Raj says that he did everything for his children and the family has a hug while Barfi Devi interrupts their lovely moment.

Barfi Devi shouts at them to get out while telling them that the whole family will be punished for their deeds as she is going to get the auction done tomorrow instead of delaying it for 5 days.

Meet Ahlawat lies that Hoshiyaar had gone to a lawyer and takes him away to talk with him while Meet Hooda wonders how to get her hands on the property papers.

Meanwhile, Hoshiyaar tells Meet Ahlawat that Neelam's abortion has been done and that she will be taken to the civil hospital from jail.

As for the gun that Hoshiyaar gives Meet Ahlawat, he tells Meet to remember that the gun turns people into wild animals while Meet Ahlawat reasons that he is doing everything for his family.

On the other hand, Meet Hooda plans to steal the documents from the Ahlawat mansion before the auction at any cost.

The next day, Meet Ahlawat comes to the hospital and is about to enter Neelam's room when he gets stopped by a police officer.

However, since he is in a disguise, he lies that he is just a wardboy and enters the room while the police officer goes to attend a call.

On the other hand, Meet Hooda sneaks into the Ahlawat mansion and tries to hide from Barfi Devi.