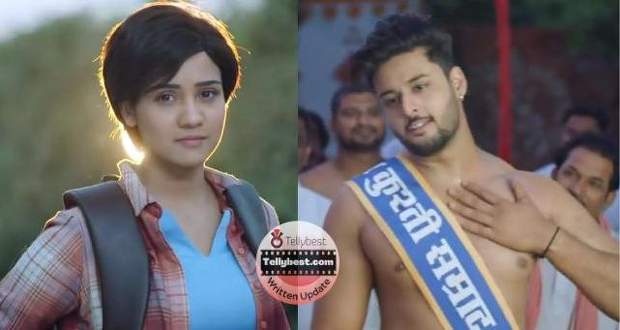 However, MM tells her that he does not like the name and explains that his name is not Meet but Manmeet while he shows his bracelet to everyone.

The family stands shocked while Babita refuses to accept the truth and tells him that she is his mother.

Manmeet tells Babita that she made him emotional too and hugs her understanding the emotions of a mother.

Further, he takes blessings from both Raj and Babita and bids goodbye to the family.

While he leaves, Babita sobs as she tells Raj that he arrived followed by his picture.

The family is hooked by her words as she says that Manmeet and Meet had the same eyes and the same face.

Later, Raj and Babita go to Meet Hooda's room with juice but get shocked to see the room empty.

Raj notices a sticky note and reads it as he realizes that Meet Hooda has gone to the village.

Babita worries as she tells Raj about the possibility of Meet Hooda stumbling upon Manmeet.

Raj tells her that Meet Hooda would be fine but Babita tells him that it would be very hard for her to see someone who looks exactly like Meet Ahlawat.

Meanwhile, at the village, Meet Hooda notices the ladies talking about Swamiji after hearing a man promoting Swamiji's skills and qualities and forming a plan.

Later, the ladies gather to see Swamiji while Meet Hooda comes there in Swami's disguise.

At the same time, Raj and Babita come to Sarkarpur in search of Manmeet but get shocked to see him hugging Sarkar and talking to him.

Meet Hooda tries to convince the ladies to join the work at the factory but the ladies refuse saying that their husbands and Sarkar have made them promise to not even think about it.

However, Meet Hooda reveals herself and tells the ladies about the benefits of becoming independent.

At the same time, Manmeet tells Sarkar that he should get profit from him too if he wants him to stay with him. He further says that he will do as he pleases.

However, if Sarkar wants to do anything for him out of kindness, he should let the city girl build her factory since it will help the village financially too and economically.

Manmeet tells Sarkar to let the name of the village get high with the building of the factory but Sarkar leaves asking him to use manpower rather than just brain.

Back at Sarkar's house, Jasodha is beating up Amriti in front of all the ladies while showing her the phone that she found in her room.

Amriti continues shouting that she is not the one who did it while Jasodha beats her up and tells her that the city girl got information from this phone only.

Flashback shows, Meghana's mother finding her with the phone and snatching it from her after she hides it in Amriti's phone to save Meghana from Sarkar's wrath.

Back in the present, Meet Hooda arrives at Sarkar's mansion and Jasodha stops her saying that girls like her are not allowed inside her house.

However, Meet Hooda walks in anyways and helps Amriti stand up as she says that she is glad at least the house is smart since the men of the house are not.

She connects her phone to the smart tv and shows them the clip of four ladies building the first wall of the factory.

However, Jasodha mocks the ladies as one of them is Nagarbahu, the other from the lower cast, the third one is a eunuch and the last lady is none other than Chanda.

Meet Hooda ignores her and leaves saying that her factory will be made and that too with the help of these four ladies who become strong once they are united.

Jasodha throws the phone after her as she says that Meet Hooda has invited death into her life by stepping into Sarkarpur.

Later, Meet Hooda helps the ladies build the wall while four goons come there to destroy it.

The ladies and Meet Hooda start beating up the goons when another goon hits Meet Hooda on the head.

She falls to the ground as she sees a bulldozer moving toward the wall.

However, Manmeet comes there on a truck just then and puts it in between the bulldozer and the wall.