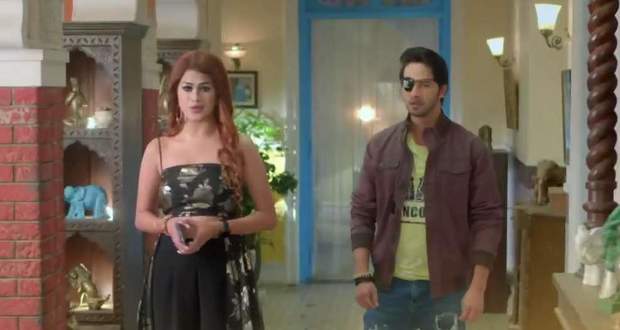 Today's Meet 16th July 2022 episode starts with Barfi Devi leaving Isha’s house and then realising she forgot her umbrella inside.

Meanwhile, Manjrii packs her bags and decides to leave the house but Meet Ahlawat tries to stop her.

Meet Ahlawat requests her to stay for Raj and Babita also stops her but Manjiri tells Babita what happened with her today.

Manjiri says how Meet Ahlawat has crossed all lines today and the goons he sent were trying to molest her.

She starts to leave while Barfi Devi was sneakily watching from outside.

However, for the first time in a while, Raj gets out of his bed and comes down the stairs to stop Manjiri and ask her where she’s going.

Babita makes an excuse and says that Manjiri and Meet Ahlawat just wanted to enjoy themselves outside in the rain and Manjiri just got a little upset when Babita stopped her from going.

Raj says that they should let them both go and that it’s their age to enjoy right now.

Manjiri starts walking up to Raj and says that they won’t go out now that the rain has stopped and Babita is relieved that Manjiri has decided to stay.

Meanwhile, Manushi is dancing in her house when Kunal comes to tell her what happened with Manjiri.

She calls Masoom and asks her to install a spy cam on Manjiri’s jewellery to keep a check on her.

Later on, Babita and Manjiri are working in the kitchen when Babita says that she’s right in her place and her anger is justified.

When Manjiri says that she can’t believe how someone like Raj can have a son like Meet Ahlawat, Babita explains how Meet Ahlawat wasn’t always like this.

She explains how Meet Ahlawat became this rude after his heart broke and that it is difficult for him to see Manjiri’s face all the time.

She requests Manjiri to understand Meet Ahlawat’s position as well.

When Manjiri is walking alone in the house, Masoom pretends to trip and falls on Manjiri so that she can install the spy camera on her jewellery.

Raj and Babita come there and Raj asks why Manjiri is not going into Meet Ahlawat’s room, to which Masoom replies that they’re separated but Raj says that living separately for a while doesn’t mean that a married couple has been separated.

Manjiri is worried about going into Meet Ahlawat’s room.