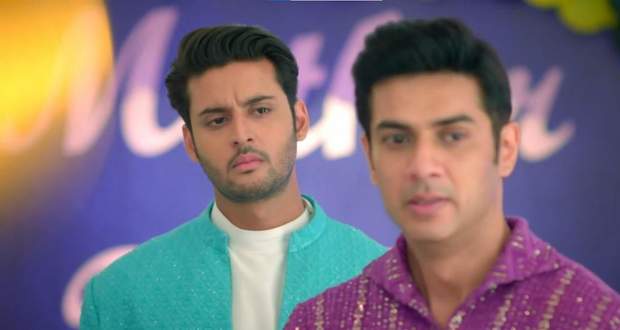 Today's Meet 16th June 2022 episode starts with Babita telling Anubha to not get offended and saying that she won't be able to give Meet Hooda the comfort and luxury at Shahbad.

Anubha bids Babita goodbye and leaves while Meet Hooda goes after her to talk to her.

However, Anubha lies to Meet Hooda that she thought about everything and that she thinks that Meet Hooda should stay at the Ahlawat mansion only.

Meet Hooda bids her goodbye and thinks that she now realizes how much a mother suffers for their children's happiness.

Later, Masoom sees the gifts given to Meet Hooda and gets jealous while Meet Hooda says that they are not expensive enough and give them to servants.

Masoom goes to Babita and complains to her while Babita refuses to believe her and sends a glass of Kesar Milk.

However, Meet Hooda sends it back and demands that she wants to bathe in Kesar milk.

Masoom tries to instigate Babita but Babita gets happy that Meet has asked for something high-class for the first time and says that she will satisfy her demands.

Masoom complains to Meet Ahlawat but he also doesn't say anything.

Later, Babita tells Meet Hooda to come for the appointment at the city hospital but Meet Hooda says that she wants to give birth to her child at the New York hospital which shocks everyone.

Meet Hooda goes to the kitchen to get a milkshake while Meet Ahlawat goes after her and performs a ritual on her thinking that she's been possessed by something.

However, Meet Hooda says that she was just finding a hospital of standard as desired by Babita.

Later, Babita tells Meet Hooda to send her the details of the hospital so that she can make hotel arrangements.

However, Meet says that she doesn't have to come as there are personal attendants at the hospital.

© Copyright tellybest.com, 2020, 2021. All Rights Reserved. Unauthorized use and/or duplication of any material from tellybest.com without written permission is strictly prohibited.
Cached Saved on: Sunday 2nd of October 2022 11:19:19 AMCached Disp on: Monday 3rd of October 2022 07:18:47 PM