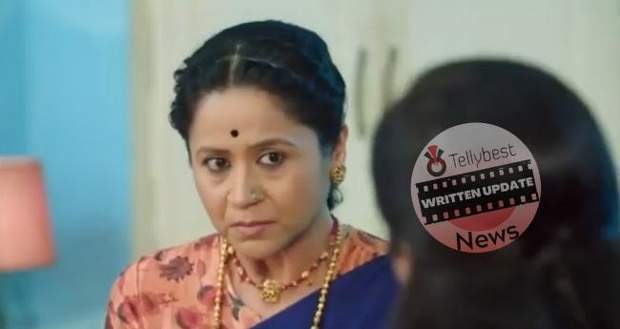 He denies the claims put by Meet Hooda while Meet Ahlawat almost raises his hand at the Pandit.

Meanwhile, Neelam is nervous about wearing the short red dress while Masoom tries to get her to drink alcohol.

When Neelu denies drinking it, Masoom secretly spikes Neelam's juice to see Laila come out in an inebriated state.

On the other hand, Kamal & Pooja ready the sleeping baby boy for the sacrifice, waiting for Baba Ji to arrive.

To get the public’s support, the Baba chants some mantras into a coconut while the public praises him when the inside of the coconut turns red upon breaking it.

Meet Hooda grabs the Baba’s legs, stating she also believes him now while she touches the red liquid on the road to see what it is.

She then signals at Meet Ahlawat to do the same to get Baba’s trust.

Meet Ahlawat bends down and sees a red liquid and an injection in the Baba’s ‘potli’ fallen down on the road.

At Ahlawat Mansion, Masoom brings a slightly drunk Neelam to her room, asking Neelu to buy more dresses like the silver ones that got burnt accidentally but Neelam says it was not hers.

To get her drunker, Masoom adds clear vodka to Neelam’s water but Neelam smells it.

Getting angry, Neelu finally pushes Masoom away as her head hurts the wall when all of a sudden, Barfi Devi comes and grabs Neelam’s arm.

Meanwhile, Meet Hooda tells everyone that she can do the same with Baba’s blessing, making everyone praise her.

However, she stops them to sing fake praises and reveals the red colour & injection hidden in Baba’s bag.

The public outcries at Baba’s hypocrisy and starts beating him.

In Dharamshala, the police arrive to arrest the Baba who finally confesses that Pooja & Kamal are in the jungle where the baby would be sacrificed in exactly twenty minutes.

Meet Ahlawat gets shocked when Baba reveals even if he doesn’t reach there, Kamal will give the baby’s ‘aahuti’ since he knows the ritual.

Meet Ahlawat and Meet Hooda join hands together to search for the baby while Kamal pours the ghee on the baby’s body and tells Pooja that the baby will be sacrificed when the first sunrays fall on the Earth.

© Copyright tellybest.com, 2022, 2023. All Rights Reserved. Unauthorized use and/or duplication of any material from tellybest.com without written permission is strictly prohibited.
Cached Saved on: Monday 21st of November 2022 06:00:33 AMCached Disp on: Tuesday 29th of November 2022 12:00:53 AM