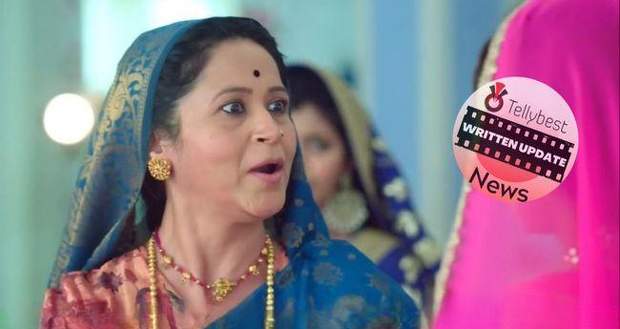 Today's Meet 16th September 2022 episode starts with Neelam coming to Meet Ahlawat and telling him that she has a request from him.

She tells him that she wants him to share his office problems with her and that she knows he is disappointed by Meet Hooda's betrayal.

Meet Ahlawat says that she is right and states that Meet Hooda is the type of person who will prove herself innocent at any cost.

Later, Meet Hooda tells the family members that there is still time for Visarjan and suggests playing a game.

However, Barfi Devi mocks her and tells her to focus on proving her innocence as one day has already passed.

Meet Hooda challenges her and Barfi Devi states that she will bow down to Meet Hooda and touch her legs while apologizing if Meet Hooda can find the thief.

Back at the Hooda house, Hoshiyaar and Dadi play a trick on Masoom and get worried when they learn that Masoom does not have the money that got stolen.

On the other hand, Meet Hooda blindfolds the Ahlawat family and tells them that they have to figure out what the object is given to them and write it down in their notes.

After some other things, Meet Ahlawat says that it's the final round and gives Meet Ahlawat's jacket to everyone one by one.

Flashback shows, Meet Hooda telling Raj that they have to test all the family members and states that she will give Meet Ahlawat's coat during the game to everyone as the thief knows the location of the keys in the drawer and will subconsciously reach for it.

Raj says that the thief might stop themselves while Meet Hooda says that which is why they will have to gauge everybody's expressions.

Back in the present, Raj and Meet Hooda look at everyone as the jacket gets passed around but fail to notice any change in anyone's expression.

Meet Hooda announces that Babita is the winner when a servant shouts to close all the doors and windows as a beehive has gone crazy.

While closing the door, Meet Ahlawat gets stung by some bees and Babita shouts to get something made of metal to calm the itch.

Neelam pushes Meet Hooda away and pulls out the key from Meet Ahlawat's jacket which makes Meet Hooda confirm that she is the thief.

Later, Meet Hooda confronts Neelam and asks her why she stole the money but Neelam stays silent.