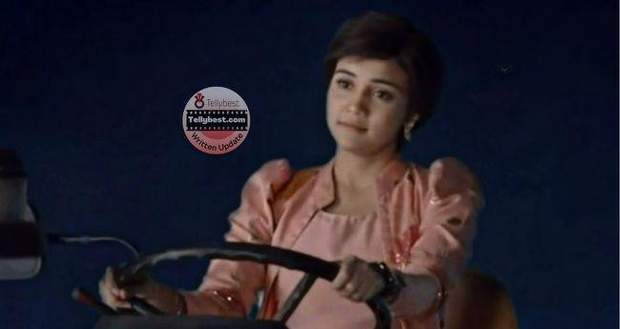 Today's Meet 17th January 2023 episode starts with Manmeet entering the scene and blocking the bulldozer from getting near the wall by bringing his jeep in the way.

Manmeet walks to Meet and carries her on his shoulder while challenging the men to try attacking them again if they want to get beaten up.

The men attack Manmeet and Meet but Manmeet teaches them a good lesson by beating them with Meet being in control.

The women also help Meet and Manmeet in beating up those men until they flee away in fear.

Meet looks at Manmeet and thanks him but gets stuck in the middle as her eyes rest on his face.

Manmeet asks Meet what happened to her suddenly while Meet remembers Meet Ahlawat’s last words to her before dying.

Manmeet notices Meet’s wounds and says that he will put medicines on them and takes her with him.

Meet remains in a frenzied state as she continuously gets flashbacks of Meet Ahlawat smiling at her as she looks at Manmeet.

Manmeet takes Meet to his locality and treats her wounds by applying medicine to them.

Meet remains silent while Manmeet compliments her valor and courage seeing how she fought with those men despite getting hurt.

Manmeet introduces himself formally to Meet and says that he is the number one wrestler in Sarkarpur and is still waiting for his love to enter his life.

In a happy mood, Manmeet tells Meet that he will make her taste his favorite Kesar Lassi which boots his energy instantly.

Manmeet serves the lassi to Meet and asks her to drink it in one go but Meet finds her mind clouded with Meet Ahlawat.

Manmeet drinks the lassi himself and asks Meet to drink it so that both of them get a white mustache over their lips.

Meet starts to cry as Manmeet shows Meet’s face covered with a white mustache because it reminded her of Meet Ahlawat.

Without telling anything more, Meet runs away from there while Manmeet remains confused about the entire situation.

Meanwhile, Sarkar brings Yashoda to a room and tells her to break her hunger strike as she is harming her health by doing that.

Sarkar promises Yashoda/Jasodha that he will bring Meet at her feet within the next ten days as no one other than Sarkar rules in Sarkarpur.

Later, Yashoda bangs a plate in the house and announces that all the ladies should get ready for the upcoming wedding that will take place in the next 10 days.

Amriti begs Yashoda not to bring another woman into that house as she is trying to conceive a child but Jashoda kicks her away and says that Sarkar wants the wedding to take place.

At the same time, Babita says that it is fate that Manmeet came into their lives and they should let Meet meet him.

Meet denies saying that Manmeet is not Meet Ahlawat except for his physical features.

At night, Meet finds herself thinking about Manmeet continuously and tells Meet Ahlawat that he is the only person in her heart.

The next day, Manmeet asks Meet why she is avoiding him instead of thanking him for his help, and refuses to let her leave without answering.

Meet lands a hard slap on Manmeet’s face as he continuously asks Meet to answer his questions.

© Copyright tellybest.com, 2022, 2023. All Rights Reserved. Unauthorized use and/or duplication of any material from tellybest.com without written permission is strictly prohibited.
Cached Saved on: Wednesday 25th of January 2023 09:53:50 AMCached Disp on: Wednesday 1st of February 2023 06:39:02 PM