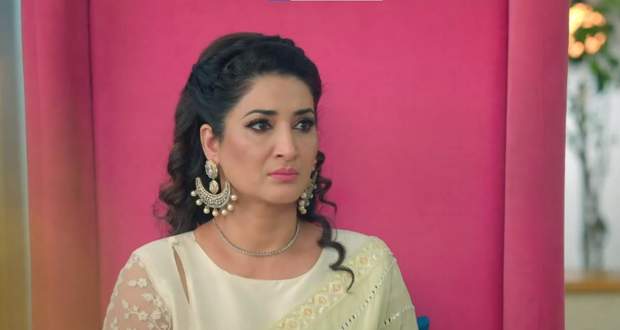 Today's Meet 17th June 2022 episode starts with Babita saying that she will have to find accommodation while Meet Hooda says that she doesn't have to come as there are personal adventures there.

Meet Hooda tells Babita that she can boast to her friends about her grandchild being born in the best hospital.

She gives Babita the form and tells her to pay the fees while Babita loses her composure and tells Meet Hooda that she doesn't want to talk to her at the moment.

Before leaving, Babita tells Meet Hooda to remember that there is no limit to the best and that the people's care is the most important.

Later, Meet Ahlawat tries to tell Meet Hooda to apologize to Babita when a servant informs them that Raj has asked for them in his room.

Meanwhile, Babita talks to Raj and tells him that she is deeply wounded by Meet Hooda's words.

However, Meet Hooda repeats Babita's words and reveals that she just wanted to make her realize that Anubha would have done everything to keep her and the child happy.

Further, Meet Hooda reveals that Anubha also had booked the same doctor in the city hospital that Babita had wanted for her.

Masoom again tries to manipulate Babita saying that Meet Hooda did this to hurt her but Meet Hooda again gives an emotional speech and wins over Babita.

Babita also gets emotional hearing Meet's words and apologizes to her while telling her that now she has the right to decide from there she wants the baby's delivery to be done, Ahlawat house or Hooda house.

Just then, a servant comes there and informs them that the photographer has arrived, and Meet Ahlawat reveals that she's there for the maternity photo shoot.

The lady introduces herself as Tanya and she addresses Meet Ahlawat as 'Golu' and talks about their college days.

Further, Tanya asks Meet Hooda for permission to take Meet Ahlawat with her for checking the shooting location, and Meet Hooda agrees.

They leave while Masoom and Hoshiyaar tell Meet Hooda to be careful of Tanya.

© Copyright tellybest.com, 2020, 2021. All Rights Reserved. Unauthorized use and/or duplication of any material from tellybest.com without written permission is strictly prohibited.
Cached Saved on: Sunday 2nd of October 2022 09:39:45 PMCached Disp on: Friday 7th of October 2022 02:23:54 PM