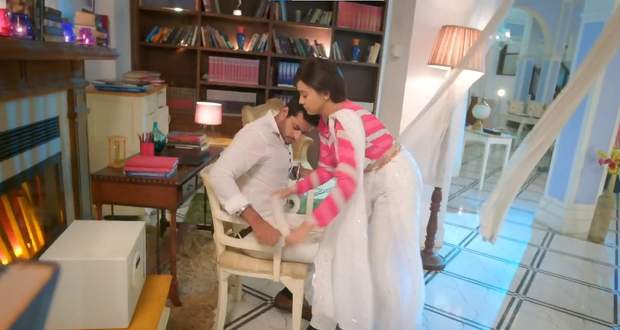 Today's Meet 17th May 2022 episode starts with Ram folding his hands in front of Meet Hooda and revealing to her that he was the one who had shot Ashok.

Ram reveals how Abhay helped him push away the case of Ashok Hooda's death and accepts all his wrongdoings.

Ram pleads with her to arrest him but she tells him to keep silent till she proves Raj innocent.

Later, Meet Hooda wonders the reason for Abhay lying to her during the interrogation even after knowing the truth about Ram being the killer.

She wonders what was the motive behind Abhay getting Shantanu and Isha married.

Just then, Meet Ahlawat comes there and throws a pillow on the couch demanding her to sleep on the couch while she forcefully hugs him.

However, Meet Ahlawat leaves and brings a partition curtain which he keeps in the middle of the bed and sleeps on one side.

Meet Hooda sits on the other side and moves her hands toward Meet Ahlawat but takes it back in helplessness.

Both of them look the other way and fall asleep crying.

The next morning, Meet Ahlawat and a lawyer go to the judge with the bail application but it gets rejected due to not having enough solid evidence.

As Meet Ahlawat leaves, Meet Hooda goes to the judge with the technical report verifying that the video was edited and requesting her to rethink the bail application.

Elsewhere, Abhay is boasting to Shantanu about what he will say to the judge when one of Meet Hooda's man puts a tracker in his car with the excuse of tying evil-eye catcher onto the front of the car.

Back to Meet Hooda, she threatens Tej with a gun and further knocks him out saying that his kidnapping will be a key element in Raj's freedom.

© Copyright tellybest.com, 2020, 2021. All Rights Reserved. Unauthorized use and/or duplication of any material from tellybest.com without written permission is strictly prohibited.
Cached Saved on: Monday 3rd of October 2022 06:06:59 PMCached Disp on: Friday 7th of October 2022 09:30:54 PM