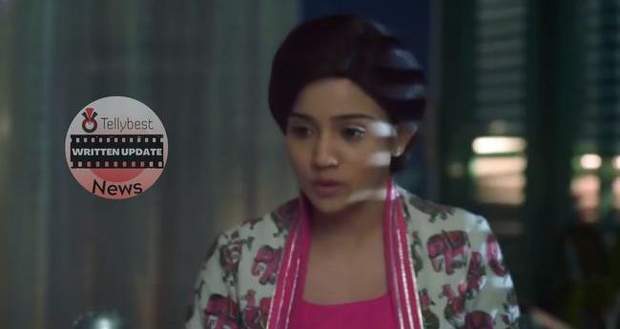 Today's Meet 17th November 2022 episode starts with Masoom bringing Babita to Raj's room and telling him to confess that he is the one who told the hospital name to Meet Hooda.

Raj accepts the truth and Babita starts arguing while Raj tells her to remember that Meet Hooda has gone to bring HER son back.

Raj tells Babita not to come in Meet Hooda's way until the 24 hours are passed while Babita leaves saying that she will not forgive him if anything happened to Meet Ahlawat, Neelam, or the heir of the family.

Babita and Masoom leave while Raj calls Meet Hooda and asks her if she found anything.

Meet Hooda reveals to Raj that she has found out that Neelam has hidden Meet Ahlawat in the hospital.

Raj suggests informing the police and the DCP about it but Meet Hooda refuses.

Meet Hooda tells him that Neelam might harm Meet Ahlawat if she learns that police are involved and assures Raj that she has a plan.

Further, Meet Hooda sends a voice message challenging Neelam to bring Meet Ahlawat in front of her to prove that she isn't just bluffing.

Laila looks at the message and caresses unconscious Meet Ahlawat's face asking him if she should give him a response or let it go as a silly mistake.

Later, Meet Hooda gets a message from Neelam telling her to come to bench number 10.

A lady comes there and Meet Hooda goes in front of her to remove the mask.

When the lady doesn't turn out to be Neelam, Meet Hooda apologizes and goes back to the bench.

Just then, she notices Meet Ahlawat's necklace on the bench and a cup of coffee on the table opposite the bench.

Meet Hooda looks around when she gets a message from Laila telling her to drink the coffee as a welcome gift.

Meet Hooda realizes that it is Neelam's plan but decides to drink the coffee anyways.

Further, Meet Hooda falls unconscious while Laila comes there with her driver and puts her on a stretcher before covering her with a white cloth.

On the other hand, Barfi Devi sees Neelam's hospital room empty and gets worried thinking that Meet Hooda was right about Laila kidnapping Meet Ahlawat.

Later, the driver digs a hole in the middle of the jungle and puts a giant box in it after which he throws Meet Hooda's unconscious body in it.

Laila tells him to keep an eye on Meet Ahlawat while she takes care of Meet Hooda.

Thinking that her plan is successful, Neelam sits down and talks about her victory after which she goes to close the wooden box.

However, Meet Hooda stops her midway and emerges out of the box while Laila tries to escape.

Meet Hooda manages to get a hold of her and reveals that she had not drunk the coffee.

Just as Meet Hooda slaps Laila, Laila turns in Neelam and keeps begging Meet Hooda to ask her what is happening.

Meet Hooda keeps slapping Neelam suddenly Laila takes over and stops her telling her that she cannot even touch Laila.

Meet Hooda angrily asks what Laila she is speaking about while Laila turns and laughs as she says that Laila is trouble and will take whatever she wants instead of bowing down to someone like her.

© Copyright tellybest.com, 2022, 2023. All Rights Reserved. Unauthorized use and/or duplication of any material from tellybest.com without written permission is strictly prohibited.
Cached Saved on: Monday 21st of November 2022 12:55:44 AMCached Disp on: Friday 9th of December 2022 03:52:31 AM