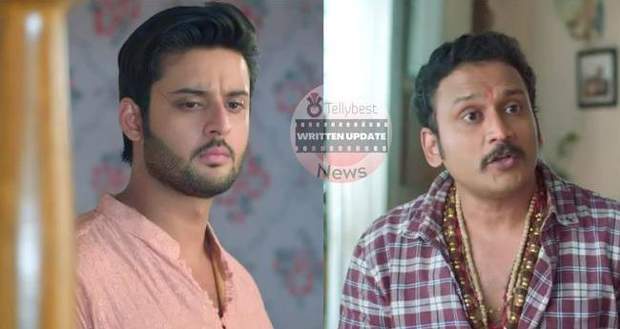 Today's Meet 17th October 2022 episode starts with Meet Hooda and Meet Ahlawat looking around the dense forest when Meet Hooda notices the abandoned house and points towards it.

On the other hand, Pooja stands near Kamal holding the rope of the crib in her hands as she asks him what they would do if Meet arrive there.

Kamal tells her that he has prepared for that too and makes her sit with him for the pooja.

Meanwhile, Meet Hooda hears the mantra coming from outside and tells Meet Ahlawat about it.

At the Ahlawat house, Barfi Devi tells Neelam to stand outside while she talks with the doctor.

The doctor tells Barfi Devi that she needs to make Neelam realize that her mother is always there for her.

Barfi Devi agrees and thanks the doctor before leaving.

Elsewhere, Meet Hooda and Meet Ahlawat open the window and get shocked to see Kamal and Pooja doing the pooja while the baby's crib is hung in the air.

Meet Ahlawat shouts at Kamal in anger while he laughs and tells them that he has created a system made out of rope that will make the crib twist and make the baby fall into the holyfire as soon as the door is opened.

Meet Ahlawat thinks that Kamal is lying and goes to break the door but Meet Hooda sees the crib moving and stops him.

Further, they both form a plan and barge inside the house while Meet Hooda jumps to save the baby.

However, Kamal throws a fishnet on them and traps them while he lights the house on fire and goes out of the house while locking it from outside.

In a panicked manner, Pooja tells Kamal that they should escape but Kamal refuses while stating that he won't leave until he sees the baby die from his own eyes.

On the other hand, Meet Hooda manages to find an escape and breaks the bars from the window to escape.

Meet Ahlawat helps her climb out and gives her the baby when suddenly a wooden pillar falls on him.

Meet Hooda shouts for him and gets worried when she doesn't get a response.

Not being able to leave the child alone, Meet Hooda goes to the front of the house where Kamal and Pooja again try to steal the baby.

However, the police come there just in time and save her while arresting Kamal and Pooja.

Meet Hooda gives the baby to a police officer and rushes to save Meet Ahlawat from the burning house.

While bringing him out, Meet Hooda notices a pillar about to fall on them and pushes Meet Ahlawat to save him.

However, the pillar hits her on the head and makes her unconscious while Meet Ahlawat goes against the police to save his wife.

Later, Meet Hooda gets taken into ICU while Meet Ahlawat waits by the door and says that his Meet Hooda will make a great comeback as she can't leave him yet.

© Copyright tellybest.com, 2022, 2023. All Rights Reserved. Unauthorized use and/or duplication of any material from tellybest.com without written permission is strictly prohibited.
Cached Saved on: Monday 21st of November 2022 05:45:06 AMCached Disp on: Thursday 1st of December 2022 12:50:39 PM