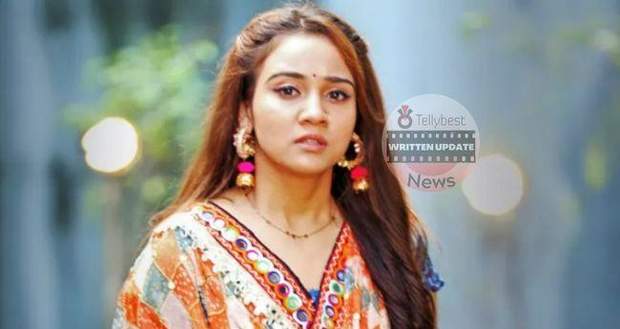 Today's Meet 18th August 2022 episode starts with Meet Hooda standing confused and asking about the girl who is standing behind Meet Ahlawat to which he declares she is his wife.

Meet Hooda questions him that he is her Dholuram, her husband then how could he do this to her and breaks his warmala.

Meanwhile, Barfi Devi separates Meet Hooda from Meet Ahlawat and shares her advice that a girl should never insist on 3 things: Alienated Money, Alienated rights and an Alienated Husband.

Babita questions Barfi Devi when she says that Meet Ahlawat is her son in law.

Meet Ahlawat tells everybody that he has married while Babita slaps him at this statement.

Babita wails that Raj is in hospital, junior Ahlawat has passed away and Meet has done a second marriage.

Ragini, Tej and Ram ask the reason for this big step of Meet Ahlawat.

However, Meet Ahlawat retorts back and indirectly says to Meet Hooda that she did everything on her own wish without telling him anything then why should he answer anybody?

Hurt Meet Hooda tells him that she was waiting this whole year to give them the biggest happiness of their life but Meet Ahlawat shattered her world in a second.

Questioning Meet Hooda back, Meet says Meet Hooda played with his feelings even after he gave everything of his to her. Even after returning after one year, she did not tell anything.

He says how Meet Hooda did not trust him and kept everything to herself without thinking of him as her husband and a father.

Meet Ahlawat asks Meet Hooda to give him his child and says he has lost his child two times just because she wanted to be great and save Manushi.

Saying the junior Ahlawat was a chain to bring Meet and Meet together but since there is no chance of him getting back, Meet Ahlawat asks Meet Hooda to get out as her face reminds him of his child's murderer.

Popat Bua claps at Meet Ahlawat and appreciates Meet Hooda's efforts saying that not only he but Meet Hooda has suffered too as she has lost her child and her mother is in hospital too.

However, Meet Ahlawat tells Meet Hooda that he asked Meet Hooda many times about her reason for role-playing as Manjiri but she never trusted him.

Just then Barfi Devi reminds her daughter Grih Pravesh as per the rituals as she has married him legally.

Barfi Devi says three things a person should not run away from: Battleground, Fear and Responsibility.

Babita, Ragini denies doing the ritual but Meet Ahlawat declares that the Greh Pravesh will happen even if anybody wants it or not.

© Copyright tellybest.com, 2020, 2021. All Rights Reserved. Unauthorized use and/or duplication of any material from tellybest.com without written permission is strictly prohibited.
Cached Saved on: Sunday 2nd of October 2022 10:53:58 AMCached Disp on: Thursday 6th of October 2022 03:17:38 PM