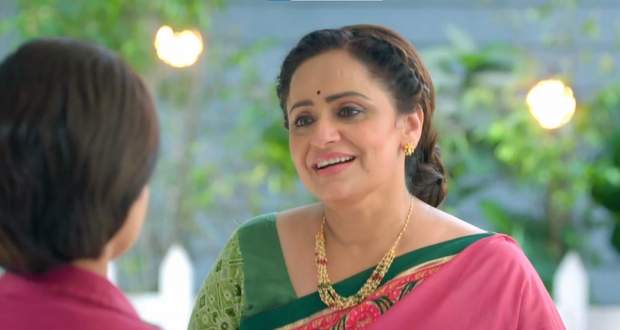 Today's Meet 18th June 2022 episode starts with Meet Ahlawat asking Meet Hooda if she's sure about going back to her house and keeps making excuses to stop her.

However, Meet Hooda says that he has Tanya to keep him company but he argues that he wants her and not Tanya.

Meet Ahlawat insists on coming with her while she refuses and comforts him by saying that she loves him and will miss him dearly.

Later, the family prepares for Meet Hooda's departure while Tanya takes Meet Ahlawat away for some discussion.

Tej and Hoshiyar tell Meet Hooda to stay back and warn her revealing that Meet Ahlawat had a crush on Tanya in the past.

However, Meet Hooda says that she trusts her husband and leaves with Babita.

Later, Babita apologizes to Anubha for rejecting her offer earlier and bids them goodbye.

Elsewhere, Tej and Hoshiyaar keep an eye on Meet Ahlawat but get noticed by him.

Elsewhere, Meet Hooda notices that the mixer is not working and tries to fix it while Anubha tells her that she should knit for her future child.

However, Meet keeps fixing the mixer and feels happy.

At the same time, Meet Ahlawat confronts Tej and Hoshiyar and reveals to them that he was distracting himself by talking to Tanya as he misses Meet Hooda.

Later, Meet Ahlawat comes to Meet Hooda's house in a disguise and tries to flirt with her while she also teases back recognizing him and also threatens to inform Anubha.

Further, Meet Ahlawat informs her about Tej and Hoshiyar keeping an eye on him and Tanya and tries to make her jealous by saying that a lot of girls are after him.

© Copyright tellybest.com, 2022, 2023. All Rights Reserved. Unauthorized use and/or duplication of any material from tellybest.com without written permission is strictly prohibited.
Cached Saved on: Thursday 26th of January 2023 01:12:48 AMCached Disp on: Thursday 9th of February 2023 08:18:44 AM