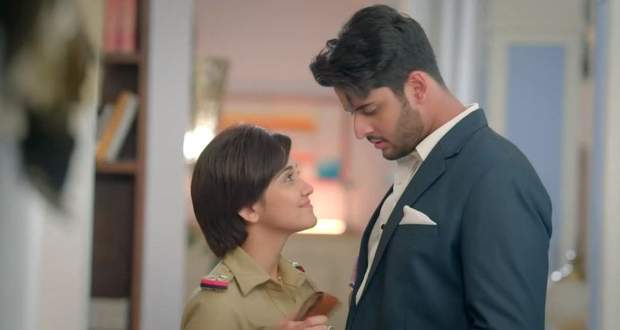 Today's Meet 19th April 2022 episode starts with Meet Hooda telling Shantanu to surrender himself while he tried to escape from there.

However, Meet Hooda beats him up and takes him from there while Shantanu picks up a face towel and hides his face with it.

Elsewhere, Sunaina acts shocked seeing the pack of cigarettes and tells Tej that they should send Ram and Lakhan to an NGO for some time.

At the Ahlawat house, Babita comes to Tej's room and questions them seeing their dropped faces.

Sunaina tells Babita about Ram and Lakhan's smoking while Tej comes toward them and tells Sunaina that she should be ashamed of herself for framing little children.

Babita scolds Tej for doubting Sunaina while Tej reasons that Ram and Lakhan couldn't afford the expensive brand of cigarettes that they found even if they were smokers and scolds Sunaina.

Tej and Sunaina get into an argument while Babita scolds them and tells them to get ready for engagement.

Later, Babita and others are greeting the guests and waiting for Shantanu and Abhay when Meet Hooda comes there with Shantanu.

Meet Hooda brings Shantanu inside the house and tells the family that she caught Shantanu at an explicit party and brought him here immediately.

The family is shocked to hear her when she explains that she also has a video of Shantanu at the party and tries to find it on her phone.

However, she fails to find the video and removes the towel from Shantanu's face to reveal someone else.

Just then, Abhay and Shantanu come there ready in engagement outfits while a flashback shows Meet Hooda stopping the jeep to help an elderly while Shantanu's friends swap him with some other guy.

Babita rebukes Meet Hooda and calls her delusional while Meet Hooda thinks of how to expose Shantanu.

Meet Hooda remembers a bruise under Shantanu's eye from her punch and demands him to remove his sunglasses.

However, Abhay starts rebuking Meet Hooda for insulting him by accusing Shantanu.

Meet Hooda insists on having Shantanu remove his sunglass when Shantanu angrily says that he doesn't want to get engaged into a family where Abhay is not respected.

© Copyright tellybest.com, 2020, 2021. All Rights Reserved. Unauthorized use and/or duplication of any material from tellybest.com without written permission is strictly prohibited.
Cached Saved on: Sunday 2nd of October 2022 12:25:49 AM