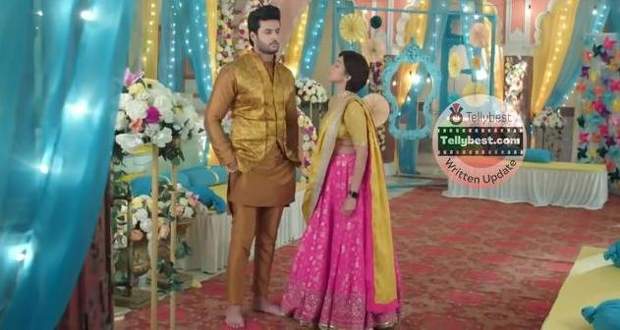 Today's Meet 19th December 2022 episode starts with Meet Hooda and Meet Ahlawat embracing each other as they finally get settled into their room with happiness.

Just then, Amma calls Meet Hooda and informs her that a proposal for Manushi has come.

Meet Hooda listens intently as Amma tells her that the guy is a lawyer by profession and is accepting Manushi even after all her evil deeds.

Meet Hooda recalls all the things that Manushi did to her and asks Amma if she is out of jail yet.

However, Amma says that Manushi will be out the next month and tells her that she would be happy if she came.

Elsewhere, Ragini cries as she holds the picture of her, Ram, and Isha wondering if they can be a happy family like they were in the past.

Just then, Ram comes there and requests her to stay back as he cannot live without her.

Ragini asks him if they can go to the US to meet Isha and Ram agrees saying that he, she, and Ishani all will go and meet Isha.

The next day, Meet Hooda is helping decorate the place for the celebration while she slips from the stool.

However, Meet Ahlawat comes there just then and saves her while he puts her down and starts nagging Amma to get her forgiveness.

Further, Meet Hooda gives a cold drink to Meet Ahlawat and tells him to keep his cool while he says that the decorators are not doing their job.

Meet Hooda scolds him saying that she is angry that he blackmailed Neelam and asks him what he would have done if Barfi Devi would not agree.

Without missing a beat, Meet Ahlawat says that he would have murdered her while a man interrupts them and states that murder is a serious crime with a serious punishment.

Meet Hooda asks him who he is while Amma comes there and introduces him as Manushi's fiancee, Anurag.

After the rituals are done, Anurag states that they have some demands which worry everyone.

Anurag looks at Meet Hooda and Meet Ahlawat while he says that the engagement should not be bland and should include some dance and enjoyment.

Everyone laughs with a sigh of relief while Amma says that even she will dance during the engagement.

Anurag says that Meet Hooda and Meet Ahlawat should start off with the dance.

The couple dances energetically while Anurag joins them in the middle and enjoys the function.

Just then, the police come there and tell them that they have a search warrant for Meet Ahlawat's car.

Meet Ahlawat tries to find the car keys while Anurag sees the key lying on the floor and gives it to him.

Meet Hooda sees a piece of cloth stuck and offers to help but Meet Ahlawat refuses and opens the trunk.

Everyone gets shocked as they see Neelam's dead body inside the trunk.

The police officer shouts to arrest Meet Ahlawat while revealing that they saw the CCTV footage of the hospital and saw Meet Ahlawat even threatening to kill Neelam which is why they came to search his car.

Meet Hooda says that it is not possible and tells Meet Ahlawat to tell her the truth.

Meet Ahlawat looks into Meet Hooda's eyes and tells her that he did not kill Neelam and that he does not even know how her dead body got in the trunk of his car.

The police arrest Meet Ahlawat and take him away while Meet Hooda falls to the ground saying that her Meet cannot murder anyone.

© Copyright tellybest.com, 2022, 2023. All Rights Reserved. Unauthorized use and/or duplication of any material from tellybest.com without written permission is strictly prohibited.
Cached Saved on: Thursday 26th of January 2023 06:32:18 AMCached Disp on: Wednesday 1st of February 2023 05:53:19 PM