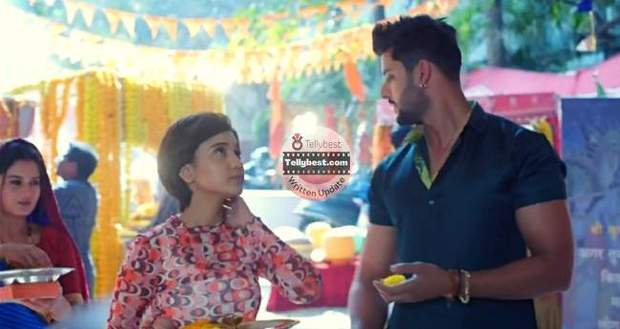 Today's Meet 19th January 2023 episode starts with Manmeet preparing for an online meeting related to his wrestling career when Meet comes to return the chunri.

Manmeet welcomes Meet and says that it is a very important day for him as he is taking the next step toward his dream.

Meet congratulates him for his success and tells him to return the chunri to the temple.

Manmeet notices that his shirt’s button is broken and starts panicking as the meeting is about to start in a few minutes.

While Manmeet searches for the cupboard keys, Meet spots the sewing kit and hands over the needle and thread to him.

However, Manmeet struggles to put the thread into the needle, leaving Meet no choice other than to help him.

Meet asks Manmeet to stand idly while she stitches the button into his kurta and comes close to him to cut the thread with her mouth.

Manmeet gets busy in the meeting and thanks Meet for helping him in getting ready in such a short time.

Meet hands over the chunri to Manmeet while Manmeet holds Meet’s hands and says that she is the second person with whom he has talked about his dreams.

Manmeet says that he wants to win a gold medal for India as that was his grandmother’s dream.

Meet says that their paths are different from now on as she will not meet with him anymore.

Manmeet says that they are no one to decide the future as fate will play its game regardless of what they want.

At night, Chanda serves food to Babita, Raj, and Meet as Meet informs Babita and Raj that no mechanic is available till the next day.

Raj asks Meet to look for someplace when Chanda says they should stay in her house as she is indebted to Meet for saving her and her child.

Meet agrees to stay and gets to know about the marriage of Mahendra taking place in Sarkar’s household in the next ten days.

Chanda says that Mahendra has one wife but got a Molkki so that she can give birth to a boy child.

As both women failed to give the family a boy child, Sarkar decided to bring a new wife for him.

At midnight, some men start banging at Chanda’s door waking up Babita, Raj, and Chanda.

Chanda tells Babita and Raj that Mahendra’s men are here to harm them and tries to lock the door.

Babita notices that Meet is missing while Chanda calls Manmeet to come there and save them.

Manmeet comes at the end moment and scares off the men from there and leaves to search for Meet after hearing that she sleepwalks.

Meet walks blankly while remembering her last moments with Meet Ahlawat and almost steps into a ditch but Manmeet saves her.

Meet sees Meet Ahlawat in Manmeet and hugs him while saying that she missed him a lot.

Manmeet slowly pats Meet on her back seeing her condition as he feels soft toward her.