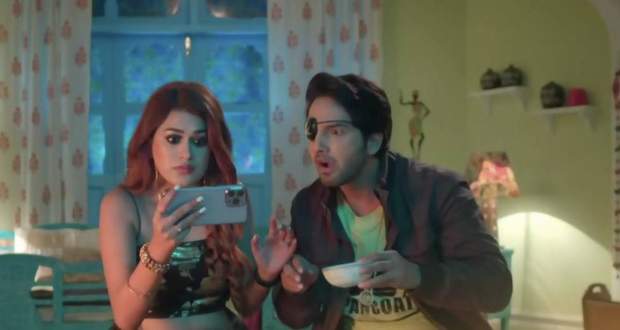 Today's Meet 19th July 2022 episode starts with Barfi Devi scolding Isha for not eating the laddoos she gave her and for being underweight and she also lashes out at Ragini too.

After she leaves, Babita says to Ragini that Barfi Devi is behaving weirdly and questions why she wants Isha to put on weight.

Later on, while Masoom is in her room, Meet Hooda scares her but Masoom says that she knows this is Manjiri but Meet Hooda says that Masoom needs to answer her questions first.

She asks Masoom what wrong has she done that she got so scared seeing Manjiri that day in broad daylight.

When Masoom acts clueless, Meet Hooda says that she knows Masoom is lying and threatens her to speak the truth.

Masoom says that Manushi is responsible for all of this and Manushi is the one who kidnapped Meet Hooda’s child and made up the story of Meet Hooda dying in a factory.

Later, it is revealed that it wasn’t Meet Hooda who threatened Masoom, it was Manjiri pretending to be Meet Hooda to scare Masoom and win Popat Bua’a bet.

She recorded this whole incident and showed it to Popat Bua but refused to share this video with anyone else.

Meanwhile, Manushi and Kunal are waiting for Manjiri to arrive to meet them and they hear a police siren, which scares them.

Manjiri comes from behind and stops them from leaving, along with some police officers.

While Manushi is scared to see this, Manjiri says that she was just acting and starts laughing.

Later when Manjiri shows Masoom's video, Manushi starts worrying and asks Manjiri if she’s here to blackmail her but Manjiri says that she only came here so that Manushi can delete this video herself.

Manushi questions this and starts to think that Manjiri might not be Meet Hooda.

Manushi asks her why she told Meet Ahlawat that she’s Meet Hooda and Manjiri asks Manushi who told her about that.

Before Manushi could reply, Manjiri assumes that Meet Ahlawat must have told her about this.

Manjiri tells Manushi she only said this because Meet Ahlawat wouldn’t stop doubting her.

Later on, Masoom thinks about telling Manushi what she said to Manjiri.

After she goes to Manushi, Duggu starts to explore the set and accidentally steps on a faulty wire and gets shocked by the current.

Masoom starts screaming when she sees this and everybody on the set starts panicking.

At that time, Manjiri dresses up in a red jumpsuit and crosses the entire set to get to the main switchboard and turn the electricity off, to save Duggu’s life.

© Copyright tellybest.com, 2022, 2023. All Rights Reserved. Unauthorized use and/or duplication of any material from tellybest.com without written permission is strictly prohibited.
Cached Saved on: Tuesday 22nd of November 2022 09:46:34 AMCached Disp on: Friday 2nd of December 2022 03:44:53 PM