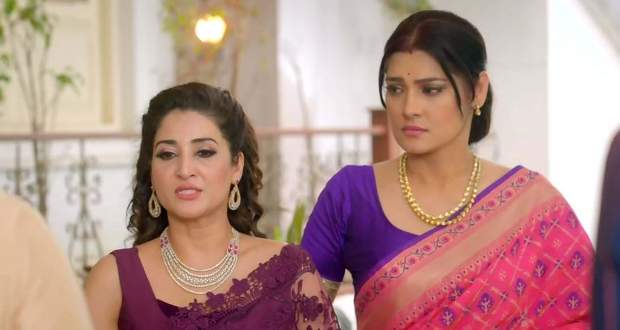 Today's Meet 19th May 2022 episode starts with Meet Hooda beating up Abhay and stating that he did a grave mistake by killing Ashok and ruining Tej's life.

She further says that he hid this for six years and even blamed Raj Ahlawat for it.

Abhay looks at her in anger but gets fearful when she shows him the camera stating that she has recorded all his confessions.

Meet Hooda demands him to confess in the conference that Raj is innocent and that he is the one who killed Ashok Hooda.

Meanwhile, at the Ahlawat house, Babita brings Raj's favorite sweet for him but he refuses to eat it.

Further, Babita keeps blaming Meet Hooda for the wrong that happened to him while Raj tells Babita to leave.

Babita goes to Meet Ahlawat and complains to him while he tries to comfort her saying that Raj is just disturbed and will be back to normal in some time.

Back at the Ahlawat house, Meet Ahlawat goes to talk to Raj while Raj tells him that he is sure Meet Hooda has a hand in him getting bail.

At the conference, Abhay tells the media that Raj Ahlawat has no part in the murder of Ashok Hooda.

Just then, Meet Hooda gets a video call from Isha.

However, upon receiving the call, Meet Hooda gets shocked to see Isha tied to a chair as she screams that Shantanu has gone crazy.

Shantanu comes into the view as he showers Isha with fuel and warns Meet Hooda that he will burn Isha alive if she doesn't save Abhay.

Elsewhere, Meet Ahlawat tells Raj that he cannot trust his wife after what she did to him while Raj says that they can rebuild the trust that they had.

Meet Hooda reluctantly says that Ashok Hooda was martyred as the police records state which confuses everyone including Abhay.

Abhay ends the conference and later mocks Meet Hooda while she demands Shantanu to give divorce to Isha.

However, Abhay tells her that he will agree to her demand if she agrees to give him the video she took of him in the hospital.