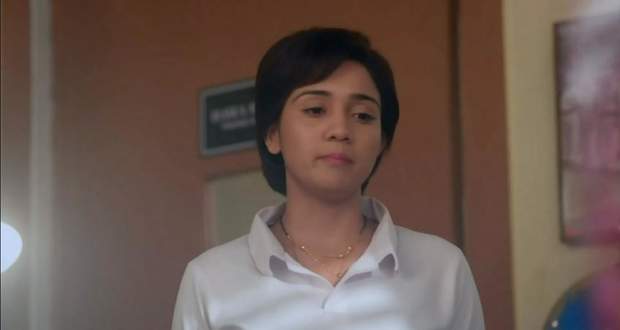 He ties a holy thread to her wrist and asks her to return fast after becoming Inspector Meet Hooda. They hug each other and bids farewell.

Later, Meet Hooda wakes up early in the morning and confesses to Ashok Hooda's portrait that she will soon become a police officer and bring justice to his death.

Meet Ahlawat also wakes up from the sound of the alarm that he had set to video call Meet Hooda. He bickers with her sulking about the fact that she got up before him. She shows her trainee uniform feeling sceptical about it and decides to check it with other trainees.

Elsewhere, Babita tells Rajvardhan that she will send Meet Ahlawat to Hong Kong to keep him busy, but Meet Ahlawat denies her idea.

Meet Ahlawat states that he is motivated by Meet Hooda's devotion and tells Rajvardhan that he will take care of the pharmaceutical business and be a dutiful son.

However, Meet Hooda enters the cafeteria and confirms that she is wearing a male uniform. Some of the guys taunt Meet Hooda about her appearance. She ignores them and decides to meet the in-charge.

Meet Hooda enters the in charge room and states about the confusion about the dress.

Much to her dismay, Hawa Singh turns his chair and laughs at her revealing himself as her officer in charge.

Meet suppresses her anger and politely asks for her uniform. Hawa Singh says that he will do something about it and asks her to wait outside his office.

Elsewhere, Meet Ahlawat explains the profits, repercussions and other aspects related to the drugs in the office meeting.

He explains about focusing on the middle-class sector and fulfilling the social responsibility of the company at the same time gaining profits.

He states that his plan would make their company rule the pharma sector creating a monopoly.

Everyone is impressed by Meet Ahlawat's business wiles and appreciates him.

Rajvardhan decides to let Meet Ahlawat take care of the business and tells Babita to pack her bag for a holiday to Hong Kong.