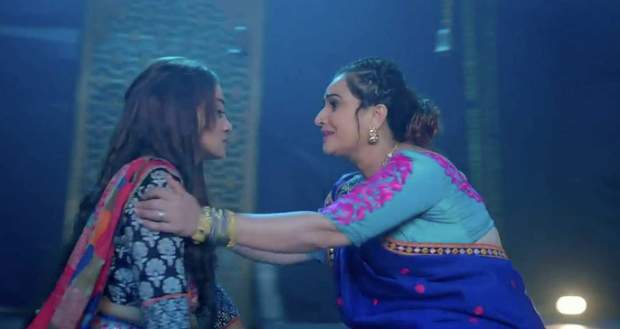 Today's Meet 20th July 2022 episode starts with Manjiri saving Duggu from an electric shock by cutting off the power.

Everyone thinks that someone else saved him and no one figures out that it was actually Manjiri.

Meanwhile, Manushi comes to Manjiri and gives her a ‘best fan’ batch.

She also tells Manjiri to consider Manushi her elder sister, hearing which a tense look appears on Manjiri’s face.

Filled with frustration, Manjiri goes to the Shiva temple and starts doing tandav in the temple alone.

Manjiri gets flashbacks of Meet Hooda’s accident in the factory and her eyes turn red from anger.

Popat Bua sees this and tells Manjiri to tell the truth to Meet Ahlawat and reveal that she’s Meet Hooda.

Manjiri starts crying and says she can’t reveal the truth.

Manjiri says that she can’t expose Manushi until her goal is fulfilled and making Manushi believe that she’s Manjiri is the first step towards her goal.

She says that she hasn’t had the chance to even meet her child once.

Adding to that, she says that this act won’t end until she holds her child once.

Manjiri says that she could have escaped that day from the green room easily and saved herself but she was doing this on purpose.

Popat says that she supports Manjiri no matter what but her decision to save Masoom’s child wasn’t right after all that Masoom has done to her.

Popat Bua hugs Manjiri and says that she’ll always have her back.

Manjiri pledges in front of Shiva that she’ll not give up until she gets to know where her child is.

However, Manjiri says that if she wouldn’t have saved him, that would make her a bad mother.

Meanwhile, Meet Ahlawat wakes up all sweaty from his sleep and he remembers the video of Meet Hooda, where she told him she was leaving him.

He throws the glass in his hand and breaks it in anger.

Later on, Meet Ahlawat finds Manjiri’s broken bangles on her sofa and cannot remember what he said to Manjiri last night.

When he goes down to find Manjiri, he sees Isha rehearsing her dance, along with Ragini and Babita.

Meet Ahlawat is worried that due to what he said, Manjiri might have left the house but Manjiri enters the room at that time and starts dancing along with Isha.

Noticing Meet Ahlawat on the stairs, Isha asks him to join them for a dance but Meet Ahlawat says he’s busy with work.