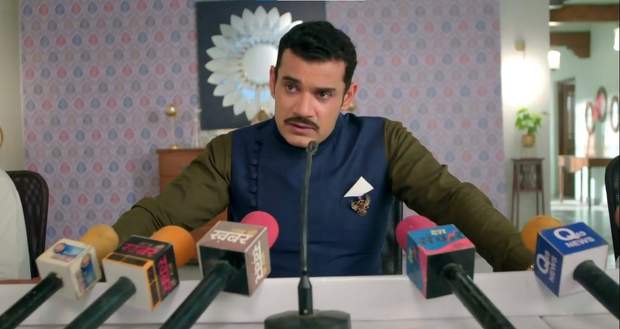 Today's Meet 20th May 2022 episode starts with Ahlawat family members seeing the press conference on television and getting shocked.

He shouts that it was not Meet Ahlawat, but Meet Hooda who proved his innocence silencing the whole family.

Further, Raj and Ram go to Meet Hooda and thank her for saving his reputation while asking her how she did it.

Meet Hooda gets hesitant but reveals that it was Abhay who had shot Ashok and not Ram.

Meet Hooda also entails how Shantanu blackmailed her to make a statement in front of the media if she wants to save Isha.

Meanwhile, at the Rana house, Abhay praises Shantanu and tells him that he will once again get everything on track.

Raj and Ram feel indebted to Meet Hooda and again praise her as she reveals about making a deal to get Isha a divorce from Shantanu.

However, Meet Hooda demands them to not reveal anything to anyone, not even Meet Ahlawat.

All three go outside as they bump into the rest of the family.

Raj praises Meet Hooda in front of everyone while Babita thanks her for proving Raj’s innocence but says that she will never accept her as the daughter-in-law of the family.

Knowing Babita, Raj goes to Meet Ahlawat and asks him if he would like to apologize to Meet Hooda after everything he’s accused her of.

Just then, Shantanu, Abhay, and Isha come there and the family gets shocked to see Isha crying.

Abhay acts apologetic and cries to everyone that he doesn’t deserve Isha as his daughter-in-law.

Abhay beats up Shantanu and says that all the accusations made by Meet Hooda regarding him were correct and that Isha doesn’t deserve to be with him.

Abhay shows them the divorce papers and states that Isha and Shantanu have already signed.