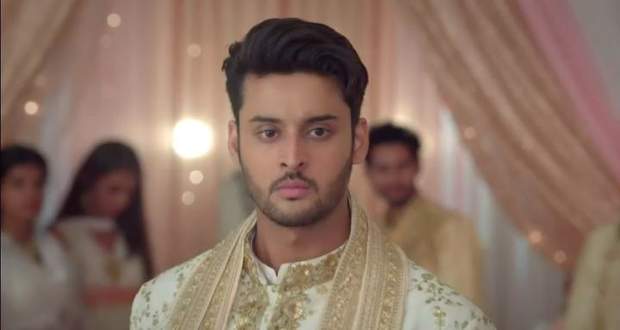 Today's Meet 21st April 2022 episode starts with Meet Hooda turning off the lights in the whole house and taking Isha downstairs with her.

Meet Hooda goes near Shantanu and pushes him so that his glasses fall off and the bruise can be seen by everyone.

Meet Hooda takes the sunglasses while the lights turn back on making Shantanu's bruise visible to the whole family.

However, Shantanu makes up an excuse saying that he got the bruise from boxing which he does every morning.

Abhay also agrees to Shantanu's lie while Babita scolds Meet Hooda and tells her to keep quiet the whole engagement.

Later, Isha goes to Meet Hooda in despair and says that nothing can stop the engagement anymore.

However, Meet Hooda notices a waiter going towards Shantanu with a tray of drinks and bumps into the waiter so that the tray falls on Shantanu.

Shantanu goes to the bathroom where the trap laid by Meet Hooda works and injures Shantanu's fingers.

Shantanu returns to the hall and informs the family that the engagement cannot happen and shows his hands shocking and worrying the whole family.

Abhay says that the engagement will not happen but the marriage will surely happen after six days and goes to the hospital with Shantanu.

Afterward, Babita asks Meet Hooda if she can do anything for the safety and good of the Ahlawat family, and Meet Hooda agrees.

Babita asks Meet Hooda to swear on Meet Ahlawat that she won't go against Shantanu anymore but Meet Hooda refuses.

In anger, Babita reminds Meet Hooda that she was an unwanted bride in the Ahlawat family and how she and Meet Ahlawat hated her.

Babita tells Meet Hooda that she hates her and leaves with the family going after her.

Meet Hooda looks at Meet Ahlawat with tears in her eyes and tells him to also say that he doesn't love her as she was forced upon him and that she was just a burden to him.

However, Meet Ahlawat doesn't say anything breaking Meet Hooda's heart and she runs to the garden to cry.