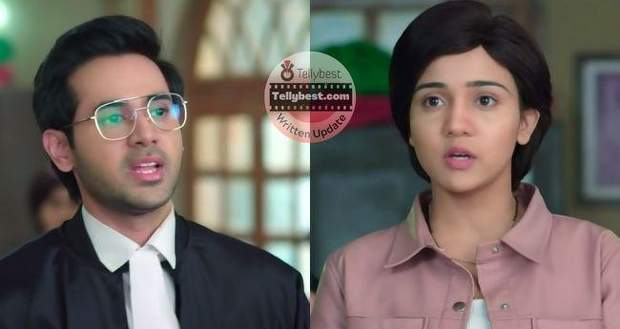 Today's Meet 21st December 2022 episode starts with Anurag telling the judge that he is going to fight the case from the prosecution's (Barfi Devi) side but he does not see anyone from the defence side.

The Ahlawat family gets shocked when Meet Hooda stands up and tells the judge that she will be the one fighting the case from Meet Ahlawat's side.

The judge asks her if she's qualified to fight the case and Meet Hooda states that although she does not hold a qualification degree, she knows the laws as she has been a police officer and knows that the aim is to bring justice to the victim and catch the true culprit.

The judge asks Anurag if the prosecution has any problem with this arrangement and Anurag says that he does not mind it one tad bit.

Further, the hearing starts as Anurag stands up and shows a picture of Neelam while telling the court that she is a naive girl who has been manipulated by Meet Ahlawat to marry him.

When Meet Ahlawat realizeD that his first wife was much better, he framed Neelam as a psycho killer and then got rid of her by planning his murder.

Anurag calls Meet Hooda to the witness box while Anurag asks her firstly if Meet Ahlawat was angry with her when he married Neelam and brought her inside the house.

Afterward, Meet Hooda calls Pratap onto the witness box as he explains to the police that Neelam had a criminal mind and that she was obsessed with Meet Ahlawat.

Anurag comes up for questioning and asks Pratap if Meet Ahlawat knew about Pratap and Neelam's relationship.

Anurag points out to the judge that it is suspicious of Neelam to be killed right after Meet Ahlawat learned about her past with another man.

Babita and the family members get worried as they wonder why Anurag is getting personal in the case and is trying to paint Meet Ahlawat as this cold-blooded murderer.

Anurag states that he is going to provide the first evidence against Meet Ahlawat and shows the clip that Meet Ahlawat had filmed of threatening Neelam with a gun that he had sent to Barfi Devi.

However, Meet Ahlawat justifies the video as he tells the Judge and the court that he had made that video to blackmail Barfi Devi to acquire their land and property that she had wrongly gotten.

Anurag asks if he's speaking the truth and turns to Meet Hooda telling her to reveal to the court what Meet Ahlawat had told her at her Amma's house.

Meet Hooda shrinks as she realizes the trap she's been put in and tells the court that Meet Ahlawat had said he would have killed Neelam if the situation came to that.

Meet Hooda tries to object saying that the situation is not related while Anurag diverts the judge by showing a clip where Meet Ahlawat is seen entering the hospital.

Anurag argues that Meet Ahlawat had dragged Neelam into a blindspot from the camera and assured her that he would save her from the police to lure her to his car.

Another footage shows Neelam hiding in Meet Ahlawat's car while he comes out a little while later and drives away from there.

Meet Ahlawat argues that he did not know Neelam was in his car while Anurag argues with him with the intention to instigate him.

Meet Hooda tries to defend her husband while Anurag's words anger Meet Ahlawat and he jumps out of the witness box to attack Anurag.

Using this to his advantage, Anurag requests the judge to give Meet Ahlawat life imprisonment or death by hanging.

However, Meet Hooda tells the judge that she believes the verdict should be given after getting solid evidence.

The judge gives Meet Hooda three days to collect evidence and show it to the court.