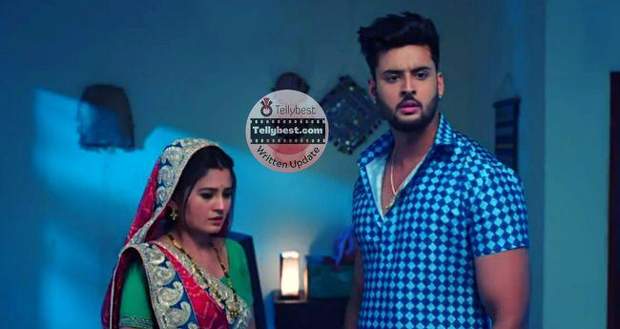 Today's Meet 21st January 2023 episode starts with Manmeet shouting that he's going to stand outside Meet Hooda's house until she doesn't tell him what problem she has with him.

Babita is about to go out to give a piece of her mind to Manmeet, but Raj stops her and tells her that it is Meet Hooda's life's decision and only Meet should decide what needs to be done.

Meet stands with her back to the door as she hears Manmeet saying that he won't leave until she gives him an answer and reasons that it is not only friendship but love now.

Meet Hooda goes to her room and feels upset as she recalls her moments with Meet Ahlawat.

Raj and Babita watch Manmeet from the window and feel sad for him while Meet Hooda sees him and sheds a tear as she continues remembering the love of her life seeing Manmeet's face again.

She holds Meet Ahlawat's picture in her hand and cries while Babita requests her to call Manmeet inside.

Meanwhile, Raj brings puts a burning chimney in front of Manmeet and tells him that he should let go of his stubbornness as he knows Meet Hooda won't come there.

However, Manmeet states that he won't leave as he wants to know what his mistake is that Meet Hooda isn't talking to him.

The next morning, Babita comes in front of Meet Hooda with a plate of food and tells her that she can't see Manmeet withering in cold anymore.

Just then, Meet Hooda gets a call from Chotu and she takes the plate from Babita while going outside.

She wakes up Manmeet who is dreaming about winning the Olympics and tells him that Olympic winners don't spend the night outside someone else's house.

Afterward, Meet Hooda tells him that the scouts from the Olympics have come for a surprise selection and tells him to go immediately.

Manmeet tells Meet that he did what he had to do to save a lady's reputation and states that he is not at fault for his face matching with Meet Ahlawat.

Meet Hooda finally agrees to be friends with him again and he convinces her to support her while taking the bike keys from her.

Meet Hooda sits behind Manmeet and they both go on their way to the village.

Back at the Sarakr's house, the Panditji is matching the Kundali of the bride and groom while the head daughter-in-law tries to get a glimpse at the name of the bride.

However, Jasodha pulls her back and tells her that she should not try her tricks at her in-law's house.

Further, Meet Hooda and Manmeet get stopped by Mahendra and his goons.

Meet Hooda tells Mahendra to let them leave since the scouts for the selection are there.

Mahendra laughs evilly as he states that he won't let Manmeet leave until she ties a rakhi to him.

Manmeet holds Mahendra by the collar and gets angry at him while Meet Hooda calms him and tells him that she will do something.

She goes to the Akhada and requests the selection coaches to come with her and see Manmeet.

The coaches refuse as they state that Manmeet should have been present at the Akhada.

Back in the market, Manmeet sees an old lady falling due to old age and asks her where she is going.

The elderly lady reveals that she wants to offer the milk to the Shivling.

Manmeet is the new BAHUBAALI!

Mahendra mocks the lady telling her that she won't be able to climb the 500 steps while Manmeet tells the lady that she is going to make her wish come true.

Manmeet brings the Shivling for 200 kgs in his shoulder and stuns everyone including the Olympic coaches who are standing in the crowd with Meet Hooda.