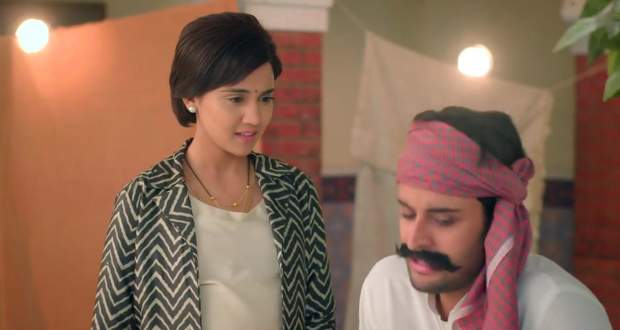 Today's Meet 21st June 2022 episode starts with Meet Hooda joking with the make-up artist while Meet Ahlawat comes there and tells her that the shoot is ready.

Meet Ahlawat helps Meet Hooda stand up while she makes a joke.

However, a distressed Meet Ahlawat does a fake laugh, and Meet Hooda questions him on it.

Tanya interrupts them and tells them to come for the pictures.

Later, Meet Hooda requests Tanya to make a video for her.

Further, Meet Hooda sits and talks about how she and Meet Ahlawat met while addressing the story to their child.

Meet Hooda praises Meet Ahlawat and says that she trusts him more than herself while he keeps recalling the moment when he and Tanya kissed.

Meet Ahlawat stops Meet Hooda saying that he has something to tell her and reveals to her that he went to the bar the previous day as he was missing her.

Tanya tries to stop Meet Ahlawat but he stops her and reveals to Meet Hooda that he accidentally kissed Tanya thinking of her as Meet Hooda.

Meet Hooda gets shocked and leaves from there while Meet Ahlawat feels frustrated and gets angry.

Meet Hooda fights with her inner self who keeps trying to break down her self-esteem.

Just then, she hears a knock on the door and opens to see Meet Ahlawat.

She tries to kick him out but he forces his way in and apologizes to Meet Hooda.

She asks him if he would have forgiven her if she had done the same mistake which silences Meet Ahlawat.

Meet Ahlawat keeps trying to justify himself saying that he was honest about his mistake and don't hide anything from her.

However, Meet Hooda tells him that he is just doing it to ease his guilt and tells him to leave.

Meet Ahlawat requests Meet Hooda to let him talk to the baby once and she agrees.

Meet Ahlawat sits on his knees and requests the baby to talk to Meet Hooda and begs for forgiveness.

At last, Meet Hooda makes him leave and weeps silently.

The next morning, the Ahlawat family sits at the breakfast table with a thick fog of tense atmosphere surrounding them.

© Copyright tellybest.com, 2022, 2023. All Rights Reserved. Unauthorized use and/or duplication of any material from tellybest.com without written permission is strictly prohibited.
Cached Saved on: Wednesday 23rd of November 2022 09:52:12 AMCached Disp on: Monday 5th of December 2022 02:03:21 PM