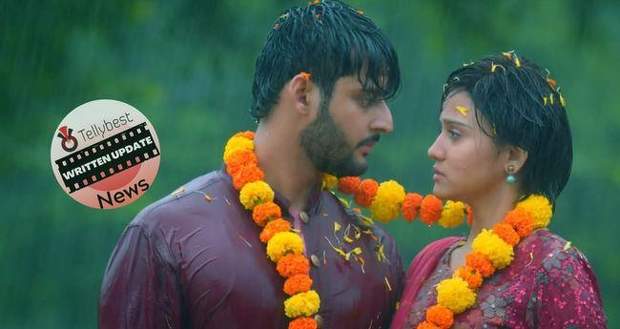 Meet Hooda reaches their window and stops hearing their conversation as Neelam asks Meet Ahlawat if he’s with her only because of the marriage.

Meet Ahlawat refuses quickly and tells her that he is with her because of his helplessness and recalls how Bafi Devi demanded him to marry her daughter to keep the secret about Deep’s death.

Meet Ahlawat asks Neelam what he can do so that she will believe that he won’t leave her and she requests him to come with her to her village where her family temple and relatives live.

Meet Ahlawat agrees and leaves from there while Meet Hooda thinks that she has to find out what secret Meet Ahlawat is hiding.

Further, Isha stops Meet Ahlawat in the hallway and asks him if she can meet the guy Manish whom she had hit with her car.

However, Meet Ahlawat gets angry and starts scolding which makes Isha upset and she leaves there with tears in her eyes.

Meet Hooda sees the commotion and goes after Isha to console her while asking her about Manish.

Later, Meet Hooda goes to her room and finds the pen while getting shocked as she sees that the pen is similar in description to the one that Isha had gifted Deep.

Meet Hooda goes to Isha’s room and she comes out but stops once she sees Barfi Devi behind Meet Hooda.

Barfi Devi gets shocked seeing the pen in Meet Hooda’s room and takes Isha inside the room while scolding her for mingling with Meet Hooda.

Afterward, Barfi Devi calls Meet Ahlawat and tells him about Meet Hooda having the pen that Isha had gifted Deep.

Elsewhere, Ram is talking to one of the investors on the call and is happy as he informs Ragini that the house will be out of debt soon.

Babita sees them and gets emotional.

On the other hand, Meet Ahlawat sees Meet Hooda calling the hospital and thinking of a plan immediately.

Further, he catches up on her from behind and gets romantic while Meet Hooda also gets lost in Meet Ahlawat’s touch.

Meet Hooda realizes what is happening and gets away from Meet Ahlawat while he sneakily steals the pen and puts it in his pocket.

Once Meet Hooda leaves, Meet Ahlawat calls the city hospital and tells them not to give any information regarding Deep to any third party.

© Copyright tellybest.com, 2020, 2021. All Rights Reserved. Unauthorized use and/or duplication of any material from tellybest.com without written permission is strictly prohibited.
Cached Saved on: Saturday 1st of October 2022 10:44:04 PMCached Disp on: Wednesday 5th of October 2022 05:31:27 PM