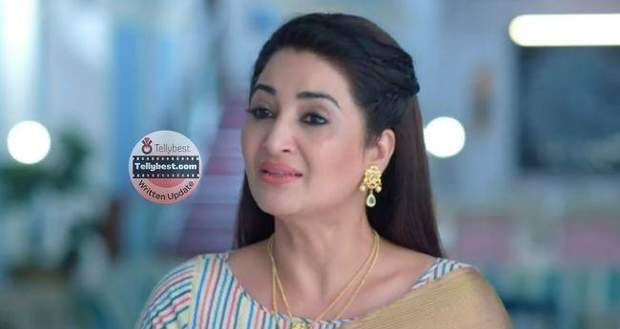 Today's Meet 22nd January 2023 episode starts with Manmeet shouting happily that he is selected while he drags Meet Hooda to the middle of the road and thanks her.

The crowd starts dispersing while Manmeet tells her that she is his lucky mascot since he got selected without any process.

However, Meet Hooda states that he has to treat her to a Kesar Lassi since they are friends now.

She asks what is the matter while Manmeet wonders out loud if he should tell her or not.

He starts leaving but Meet Hooda stops him and tells him to say what he is thinking.

Manmeet looks at Meet Hooda and tells her that he extended his hand to her with the intention of friendship but he cannot be her friend anymore since he has started falling in love with her.

Manmeet tells her that his heart has been attached to her and that he does not feel happy even if she is away from him for a moment.

He starts talking about his feelings for her from the start while Meet Hooda's fist tightens even more with anxiousness building up inside her.

Manmeet sees it and tells her to not worry since he told her because he did not want to hide anything from her and keep their friendship for her to later find out and think that he has betrayed or tricked her.

Manmeet tells Meet Hooda that he is sorry for any mistakes he might have done and bids her goodbye as he starts walking away from her.

Later, Meet Hooda returns home and Babita and Raj ask her how the selection went.

Meet Hooda starts stuttering as she says that he got selected while she asks Raj about taking his medicines.

When she learns that he hasn't taken his medicines yet, she starts getting angry at him and leaves stating that he would not have been careless if Meet Ahlawat was there.

Babita tells Raj that Meet Hooda surely fought with Manmeet and tells him to go and talk to her.

Raj goes to Meet Hooda and asks her if she's okay while Meet Hooda lies about having to sleep since she needs to reach the construction land early and rushes to her room.

Once inside her room, Meet Hooda holds the frame of Meet Ahlawat to her heart as she pleads with him to take her into his arms.

At the same time, Manmeet continues watching the bonfire as he keeps on recalling his moments with Meet Hooda.

The next morning, Meet Hooda, Raj, and Babita are on their way to their land when Chintu comes in front of their car.

They get out of the car while Chintu begs Meet Hooda to help him since Manmeet has gone crazy.

Elsewhere, Manmeet is scolding the barber while showing him Meet Ahlawat's photo and telling him to make sure he looks like the guy in the picture.

However, before the barber can do anything, Meet Hooda stops him.

Manmeet tells her that he will turn into Meet Ahlawat while Meet Hooda says that she loves only Meet Ahlawat not him.

Just then, a girl comes there and asks Manmeet for help and he fends off the goons while the girl reveals that she wants to marry Manmeet.

Back at the Sarkar mansion, Jasodha and Sarkar are talking about Meet Hooda's possible liking for Manmeet while she sees the head daughter-in-law trying to listen in on their conversation.

Jasodha drags her inside and reveals to her that it is Meet Hooda with the warning to not speak about it.

On the other hand, the girl guarantees Manmeet that she can make him fall for her and he agrees to marry her.

© Copyright tellybest.com, 2022, 2023. All Rights Reserved. Unauthorized use and/or duplication of any material from tellybest.com without written permission is strictly prohibited.
Cached Saved on: Wednesday 25th of January 2023 09:49:35 AMCached Disp on: Sunday 5th of February 2023 03:16:25 AM