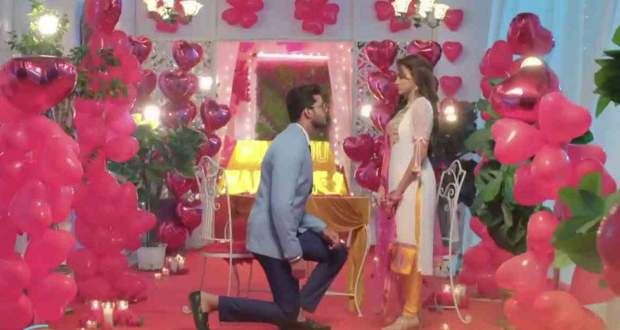 Today's Meet 22nd July 2022 episode starts with Raj announcing that Manjiri and Meet Ahlawat are to get married to which Masoom disagrees.

Raj then asks both the Meets if they are interested but Meet Ahlawat leaves giving an excuse of meeting while Manjiri follows him.

Meanwhile, Meet Ahlawat cleans the sauce from Manjiri's face with his handkerchief and asks Manjiri to pretend in front of Raj.

However, Manjiri's real emotion as Meet Hooda comes out but she covers up saying that she was just pretending.

Manjiri tells Meet Ahlawat to handle the situation somehow as she won't marry him while the family members go to their room.

Meet Ahlawat leaves while Meet Hoods get happy in her thoughts thinking about their second marriage.

Just then, Barfi Devi reaches the Ahlawat house and removes the gold bangles from her hands, and puts them in her purse.

Further,  Barfi Devi greets Manjiri and insults her while Barfi Devi falls and the bangles fall from her purse.

Barfi Devi puts the bangles back in her purse and goes inside.

Later, Barfi Devi talks to Isha's parents and tells them that she can not agree to the marriage as Isha's Kundali has a Dosh.

Ragini gets worried and asks if there is any solution to which Barfi Devi says that they have to give the gold statue of goddess Lakshmi to the groom's family.

Meanwhile, Manjiri thinks that those bangles are of Ragini and is about to go to her but gets stopped by Isha.

Meet Hooda sees the bangles on Isha's hands and questions her while Isha lies that Barfi Devi brought them back on her way and gave them to her.

However, a flashback shows Barfi Devi, making Isha wear the bangles and telling her to keep Manjiri away from Ragini's room.

Isha sends Manjiri away while Ragini tells Barfi Devi that she can't as requested which makes Barfi Devi leave.

Elsewhere, Manjiri sits with Popat Bua and vents out her emotions saying she misses her child.

Back at the Ahlawat house, Masoom tells Meet Ahlawat to refuse to marry Manjiri and thinks about getting married to Chhavi.

Later, Duggu takes Manjiri to a decorated room and leaves while she thinks that it is decorated for Isha and Deep.

However, Meet Ahlawat comes there and asks her if she would like to marry him shocking Meet Hoods.

© Copyright tellybest.com, 2022, 2023. All Rights Reserved. Unauthorized use and/or duplication of any material from tellybest.com without written permission is strictly prohibited.
Cached Saved on: Thursday 26th of January 2023 05:48:34 AMCached Disp on: Thursday 9th of February 2023 09:04:23 AM