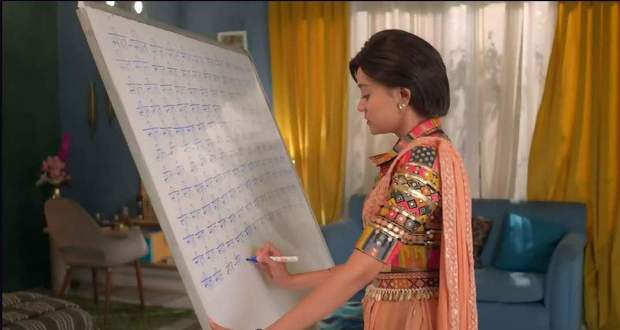 Today's Meet 23rd April 2022 episode starts with Meet Hooda bringing tea for everyone while Babita and the other females of the house ignore her.

Further, Babita gifts everyone a designer outfit for the Haldi ceremony except Meet Hooda which makes her feel separated from the family.

Further, Babita says that Sunaina will go to send the cards to Rana family instead of Meet Hooda, and Meet Ahlawat reluctantly agrees.

Later, Meet Hooda is fixing a lamp when Ragini comes there and advises Meet Hooda to not let the treatment she is suffering presently continue otherwise Babita will completely disregard her as the daughter-in-law of the family.

Meet Hooda gets a clue about Shantanu

Meet Hooda gets a call from Balveer that Shantanu is having a drug deal in his farmhouse in Murali.

Meet Ahlawat is leaving with Sunaina for sending out the invitations while Meet Hooda comes there and tells him that he needs to come with her and that Tej can go with Sunaina.

Meet Hooda and Meet Ahlawat leave for Shantanu’s farmhouse while Sunaina overhears them and learns their destination.

Meet Ahlawat compliments Meet Hooda for her plan to reunite Sunaina and Tej while Meet Hooda reveals to him that they are going to catch Shantanu in a drug deal at his farmhouse.

Meet Ahlawat stops the car and scolds Meet Hooda while she manages to convince him by promising that she won’t do anything again if she is proven wrong.

Elsewhere, Tej and Sunaina greet Abhay while he asks them about Meet Ahlwat to which Sunaina mocks Meet Hooda and says that they going to a farmhouse in Murali.

At the same time, Meet Hooda and Meet Ahlawat reach the farmhouse and manage to break the lock on the back door to see Shantanu sitting with a Priest and doing a Havan.

Flashback shows Shantanu getting a call from Abhay to stay alert for Meet Hooda and later seeing them through the camera at the main door.

Further, Shantanu gets her servant to act as a Priest and dumps the drugs in the fake fireplace to hide them.

Meet Hooda and Meet Ahlawat decide to stay for the havan while Shantanu reluctantly lights a fire in the fireplace containing the drugs to not look suspicious to Meet Ahlawat and Meet Hooda.

Meanwhile, Shantanu bears the loss due to the destruction of the drugs.

Later, Meet Ahlawat scolds Meet Hooda and tells her that she is obsessed to prove Shantanu is not eligible for Isha and demands to fulfill her promise of not accusing Shantanu anymore.

Just then, Meet Hooda gets a call from the lawyer and she leaves for the courtroom.

Elsewhere, Abhay slaps Shantanu and tells him to stay low till the wedding happens.

Shantanu gets a call from her man who informs him their sellers have been caught by the police which frustrates him even more.

Meanwhile, at the courthouse, Meet Hooda bails out Deep and further makes him promise to not contact anyone until she solves everything.

Later, during Haldi Ceremony, Meet Hooda wonders what to wear when she sees a beautiful outfit laid out for her on the bed by Meet Ahlawat and feels ecstatic.