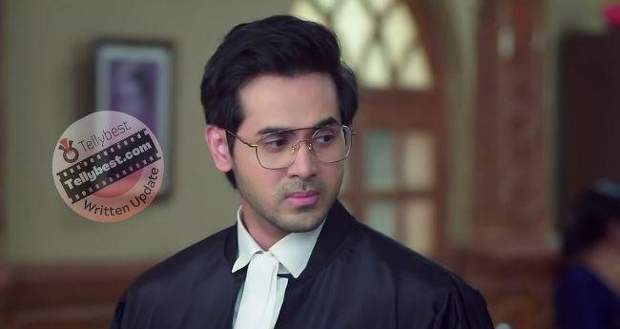 Today's Meet 23rd December 2022 episode starts with Ishani going to the designated place in the darkly lit alleyway while the culprit also arrives there with a knife in his hand.

He walks behind Ishani and is just about to stab her when Meet Hooda comes there and hits him with a wooden stick.

The culprit falls to the ground while Meet Hooda proudly says that humans make mistakes when they are either angry or scared.

She states that she did all the fake drama about the eyewitness and the press conference to lure him out.

The culprit finds the opportunity to spray paper spray into Meet Hooda and Ishani's eyes and runs away while Meet Hooda goes after him.

The culprit gets stuck in coal mud while Meet Hooda comes there and starts fighting him while he hits her with a rock and again escapes.

Meet Hooda and Ishani again catch the guy and manage to remove his money cap.

They get shocked as they learn that the culprit who has come to attack the eyewitness is none other than Neelam's ex-boyfriend, Pratap.

Ishani gets shocked while Meet Hooda hits him asking if he is the one who killed Neelam.

Meet Hooda tells him that he has to confess to the police while Pratap gets hold of an empty glass bottle and breaks it while holding Ishani captive.

Pratap threatens to kill Ishani and escapes from there while Ishani apologizes to Meet Hooda and blames herself for Meet Ahlawat being in jail.

Meet Hooda tells Ishani to reach home as she has some important work.

Later, Meet Hooda goes to Anurag and tries to tell him about Pratap being the killer.

However, Anurag says that he knows her truth and informs her that Pratap had come to inform him that she had tried to bribe him to accept the blame for killing Neelam.

Meet Hooda leaves from there and prays in her temple while Ishani sits beside her and tells her that they will get justice.

The next day, Anurag is out with Amrita when he sees a flower shop and goes to buy flowers for her.

However, a bike rider hits Amrita's wheelchair from behind and the wheelchair moves forward from where the car is coming towards her.

Anurag and others worry while Meet Hooda comes there at the right time and saves Amrita by pushing the wheelchair away.

Anurag feels grateful as he thanks Meet Hooda for saving Amrita's life.

Meet Hooda feels apologetic as she says that Amrita ended up in a wheelchair because of her past mistakes and tells her that she is sure Anurag will keep her happy and will love her immensely.

Anurag stops Meet Hooda from leaving and apologizes to her while asking her if she will give him a chance to rectify his mistakes as he now knows that a kind and wise person like her can never be wrong.

Meet Hooda tells Anurag that she is sure Pratap is the killer while Anurag tells her that he won't stop her from questioning Pratap in court.

The next day at the court, Anurag gives a thumbs-up sign to Meet Hooda while Barfi Devi worriedly asks Anurag what is happening.

Meet Ahlawat is also brought to the court while Meet Hooda calls Ishani as her testimony will be needed to bring Pratap in for questioning.

Ishani tells Meet Hooda that she is just coming when suddenly Pratap hits her with a metal road and hides her in the car's dicky.

Pratap takes the call and tells Meet Hooda to not even mention his name in the court and come to the place he tells her to if she wants to save Ishani.