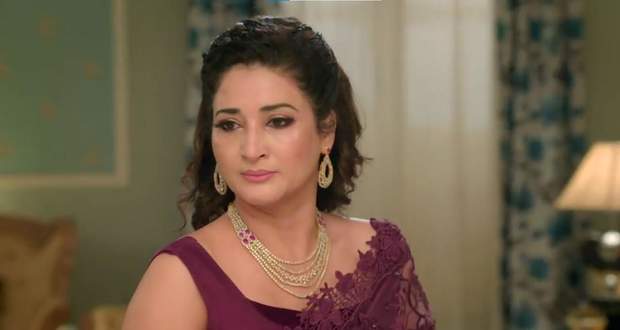 Today's Meet 23rd May 2022 episode starts with the whole family sitting for tea and Babita suggesting that they should go on a family vacation.

Babita tells Isha to suggest a destination for the vacation and Isha agrees but leaves from there saying that she won't be joining them.

Raj asks Meet Hooda where she wants to go when Masoom reveals that Meet Hooda is planning to transfer from Chandigarh.

Babita starts rebuking Meet Hooda thinking that she wants to live on her own while Masoom instigates her.

However, Meet Ahlawat stops Masoom and reveals that he is the one who told Meet Hooda to get a transfer as they are separating.

Meet Ahlawat says that he doesn't see his wife but sees Inspector Meet Hooda only when he looks at her.

Further, Meet Ahlawat reasons that he loves Meet Hooda but that he can't see her failures in life.

With tears in his eyes, Meet Ahlawat says that Meet Hooda excels in being an inspector but has negative points in becoming the daughter-in-law of his family.

He takes the transfer form and hands it to Meet Hooda after which he leaves as the family looks on in shock.

Later, Ram goes to Raj and says that they should tell Meet Ahlawat the truth behind Meet Hooda's sacrifices but Raj refuses.

Raj further says that Meet Hooda entrusted them with the truth and that he knows how to reunite them.

Elsewhere, Masoom goes to Meet Hooda and makes her question herself as to why she can't be the perfect daughter-in-law.

Meet Hooda thinks of talking to Meet Ahlawat when Raj comes there and says that he will tell them what they have to do from now on.

Meet Ahlawat calls Deep and tells him that he wants to meet up and talk to him.

Just as he hangs up, Raj comes there with Meet Hooda and shouts for the whole family.

Afterward, Raj says that since there is no love left between both the Meet, he wants them to get a divorce.

Babita hides her happiness and questions Raj who says that it is the best decision seeing the current situation.

© Copyright tellybest.com, 2022, 2023. All Rights Reserved. Unauthorized use and/or duplication of any material from tellybest.com without written permission is strictly prohibited.
Cached Saved on: Thursday 26th of January 2023 08:59:42 AMCached Disp on: Sunday 5th of February 2023 12:52:24 PM