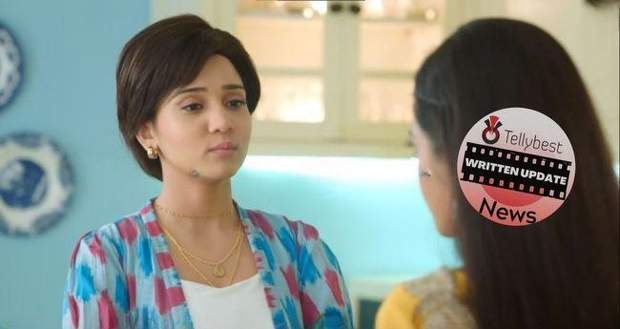 Today's Meet 23rd September 2022 episode starts with Meet Hooda telling Meet Ahlawat that the food is in the back if he wants something.

However, he tells her to stop the car at a Dhaba or a hotel while Meet Hooda realizes that he wants to go to the bathroom.

Meet Hooda stops the car and tells Meet Ahlawat that he can go but on a condition and ties his legs while keeping a hold of the other end of the rope.

The next day, Babita wonders if Meet Hooda will be able to bring Meet Ahlawat along with her while Raj drinks his tea and starts a light-hearted conversation with her.

On the other end, Meet Ahlawat wakes up and see's that they are in a crowded place while Meet Hooda tells him that they've reached their destination.

Meanwhile, a couple has a baby in the basket and they are looking very skeptically at the police officers.

The man tells Pooja to not look at the basket repeatedly or the police will get suspicious of them.

Just then, the baby starts crying and the man gets angry at Pooja while giving some medicine to the baby to make it fall asleep.

At the same time, Meet Hooda brings out a similar basket from the trunk and goes to see what Meet Ahlawat is doing.

At this time, their baskets change, and Meet Hooda runs after Meet Ahlawat as he is trying to escape from her.

Meet Hooda manages to stop Meet Ahlawat and tells him to stop for the sake of Raj as she promises that Raj will once again consider him as his son.

Getting emotional, Meet Ahlawat slowly agrees when he gets a message from Neelam.

He goes away from Meet Hooda and listens to the message in which Barfi Devi warns him to remember the promise he made to her about marrying Neelam or else she will tell the truth to Isha.

Meet Ahlawat tells Meet Hooda that he is leaving while she asks him since when Neelam became more important to him than Raj.

As Meet Ahlawat is leaving, he overhears a Panditji saying that today's Tirth is very beneficial for people who died an unnatural death such as accidents.

Meet Ahlawat thinks about Deep and goes back to Meet Hooda who smiles thinking that he came back for Raj.

Meet Hooda thinks that she has to find out the hidden truth soon when a holy dupatta falls on her and Meet Ahlawat.

© Copyright tellybest.com, 2020, 2021. All Rights Reserved. Unauthorized use and/or duplication of any material from tellybest.com without written permission is strictly prohibited.
Cached Saved on: Sunday 2nd of October 2022 10:35:54 AMCached Disp on: Wednesday 5th of October 2022 06:19:03 PM