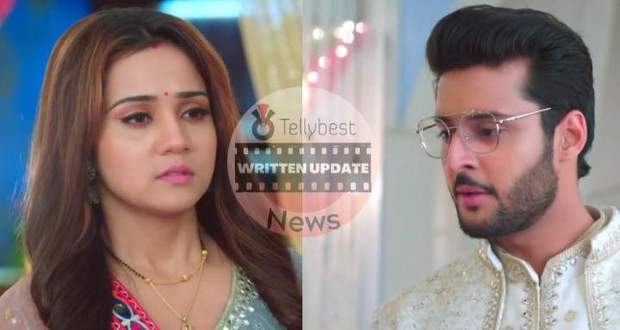 Today's Meet 24th August 2022 episode starts with Babita scolding Neelu while Meet Ahlawat announces that it is him who made the arrangements.

With a smiling facade, Meet Ahlawat tells everyone that he wanted to remove the awkwardness between him and Neelu due to which he did all this.

Babita scolds her son for forgetting about her baby's death and her father, Raj being in the hospital.

Holding back his tears and keeping up his happy facade, Meet Ahlawat says that he is tired of living in misery and starts dancing to break Meet Hooda's heart even more.

Later, Barfi Devi brings Neelu downstairs, and Meet Ahlawat starts taunting Meet Hooda saying that she should help in the preparations as she is happily invited by her ex-husband.

Meet Hooda stays strong and tells Meet Ahlawat that she will obey his request since he asked so sweetly and states that their marriage is not valid anyways since she didn't sign the divorce papers.

However, Meet Ahlawat counteracts that he doesn't believe in relations made on papers and states that he has accepted his new wife with his heart.

Afterward, Meet Hooda gives Meet Ahlawat the feather and tells him to write his new wife's name on the plate of flour.

Meet Ahlawat gets worried as he doesn't know the name of Deep's sister and writes 'Jaan' instead which hurts Meet Hooda.

During the next ritual, Meet Ahlawat and Neelu put their hands in the vessel filled with milk to find the ring.

Neelu feels upset as she knows that Meet Ahlawat isn't even trying to find the ring.

After some time, Meet Ahlawat pulls out his closed fist and says that he has found the ring.

Again, Meet Hooda interrupts and says that it is not possible since she has the ring which shocks everyone.

Meet Ahlawat again starts his act and holds Neelu's hands as he says that he has found the hand that he wants to hold in the future.

Later, Masoom returns home and everyone gets silent seeing her while Meet Hooda and Meet Ahlawat burn in anger.

Masoom sees the decorations and questions Meet Ahlawat about it who slaps her without any explanation shocking everyone.