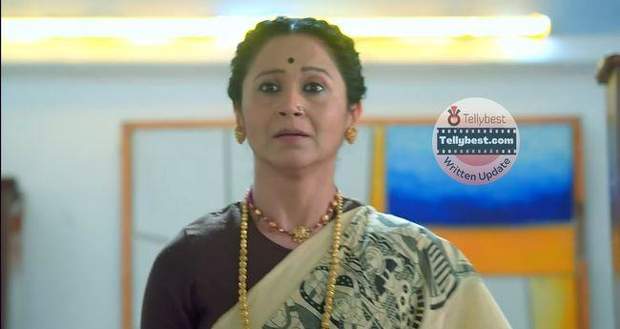 Today's Meet 24th November 2022 episode starts with the doctor checking Meet Ahlawat and asking him to raise his hand. Meet Ahlawat tries but his efforts are not fruitful.

The doctor asks the whole family to find which poison Meet Ahlawat has consumed and leaves the house.

Meet Hooda tells everyone that Neelam is the only one who knows which poison Meet Ahlawat has consumed and only Neelam can tell what antidote will work.

Supporting Meet Hooda, Meet Ahlawat says that it is a mistake to trust Neelam again.

Meet Hooda tells them that they have to release Neelam from the Police then only Meet Ahlawat can be cured.

Rajvardhan tells Ram to take the complaint back but Ram tells everyone that Neelam had a major fit so she has been taken to the hospital.

Meet Hooda says that she will get Neelam first thing in the morning and tells everyone should go and rest.

Later, Meet Hooda brings Meet Ahlawat some milk and asks him why is he punishing her by sleeping on the couch.

Meet Ahlawat tells her that he made a series of bad decisions and he deserves to sleep on the couch.

However, Meet Hooda tells him that what is done is done and he should let the past be past.

Meet Hooda tries reverse psychology on Meet Ahlawat and tells him that she is super happy to have the whole bed to herself while Meet Ahlawat also joins her.

The next morning, Meet Hooda goes to the hospital and finds Neelam having another fit and she tries to send everyone away from herself.

The doctor gives Neelam an injection and takes Meet Hooda to her own cabin to talk.

Raj calls her inside and then she feeds Meet Ahlawat some more soup.

Meet Ahlawat asks his parents about Meet Hooda and tries to call her but his hands do not move so Babita calls for Meet Ahlawat.

On the other hand, Meet Hooda talks to the doctor and asks her about Neelam’s condition.

The doctor tells Meet Hooda that it is highly dangerous to take Neelam out because if Laila takes control Neelam's personality will disappear.

Meet Hooda tells the doctor she knows the risk but she is left with no other choice but to release Neelam.

At home both Raj and Babita sees Meet Ahlawat struggling to move his hand, Babita says that because of her Meet Ahlawat has suffered a lot.

Afterward, Meet Hooda tells Neelam to get ready as she is taking her home and adds a camera in her jewelry to be cautious.

Meet Hooda remembers Meet Ahlawat telling her that she should be careful around Neelam then she shows him the camera.

© Copyright tellybest.com, 2022, 2023. All Rights Reserved. Unauthorized use and/or duplication of any material from tellybest.com without written permission is strictly prohibited.
Cached Saved on: Thursday 24th of November 2022 11:36:14 PMCached Disp on: Wednesday 7th of December 2022 04:41:10 PM