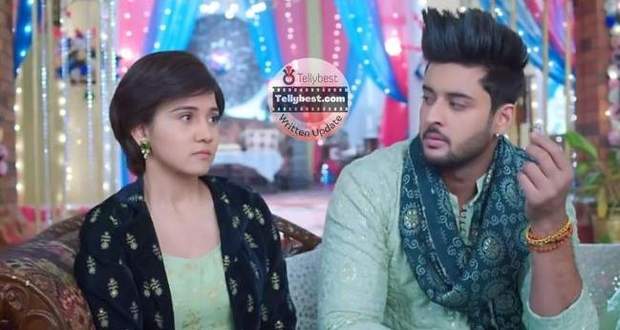 Today's Meet 26th January 2023 episode starts with Manmeet shielding Meet Hooda from the goons as they all raise their weapons against him.

Manmeet asks Meet to go away and call the police while Meet Hooda gets a flashback of her Meet Ahlawat.

Manmeet quickly locks Meet in a room and presses his back against the locked door.

He pretends to get hurt by the goons while Meet Hooda cries and keeps knocking at the door for Manmeet to open it.

Meet escapes via the window but as she runs, she gets a call from Sarkar.

Sarkar lets her know that due to her, his Manmeet Pehelwan (wrestler) has landed in a hospital.

Meet feels extremely guilty while Sarkar cuts the call and is seen normally conversing with Manmeet and Jasodha.

Manmeet eats sugarcane and says now he has Meet Hooda under his claws while Sarkar and Jasodha smile evilly.

On the other hand, Meet runs to the hospital where Manmeet is admitted and keeps calling him Meet.

Manmeet smiles once he sees Meet Hooda as he lies on the stretcher.

Meet tries to touch him but Manmeet flinches as if it is hurting him.

Suddenly, a ring is thrown on Manmeet's bed as Shagun enters and announces she cannot marry a physically disabled man now.

Meet then gets to know that Manmeet's left hand is cut.

Meet gets teary-eyed as Shagun does the emotional acting of almost getting a perfect, strong wrestler husband who has lost his hand due to Meet Hooda.

Shagun challenges Meet if she can give a shoulder to Manmeet for support while Manmeet beckons Shagun to leave through his expressions.

Meet keeps crying as Shagun says now it seems as if her lips are sealed.

Shagun goes back to Sarkar's house and seems frustrated when Jasodha teases her for being jealous.

Shagun says that she is tired of the city maid (Meet) who is snatching her Manmeet away.

However, Jasodha promises Shagun that Manmeet is not going anywhere and she will be his bride only.

However, Manmeet lies to the SP that while wrestling, his hand got stuck in a machine and that is how he lost it.

Meet says he is lying but SP leaves and later, Manmeet manipulates Meet Hooda into thinking that he is protecting her.

He says that with no hands, he cannot protect her from Sarkar and for the first time in his life, he is doing something for someone.

Meet Hooda gets emotional and leaves his ward while Manmeet laughs to himself sickly.

Outside, Babita scolds Meet for not understanding Manmeet's feelings toward her because if she had accepted his proposal, he wouldn't lose his hand.

Raj tries to calm Babita down but she keeps crying as she sees her Meet in Manmeet.

On the contrary, Manmeet videocalls Sarkar and says that the city-lady is now trapped in his game of love and must be thinking about him.

Sarkar says that they have to cut her wings quickly while Manmeet is sure that his charm has already paved its way into Meet's heart.

© Copyright tellybest.com, 2022, 2023. All Rights Reserved. Unauthorized use and/or duplication of any material from tellybest.com without written permission is strictly prohibited.
Cached Saved on: Thursday 26th of January 2023 11:57:01 PMCached Disp on: Thursday 2nd of February 2023 09:18:58 PM