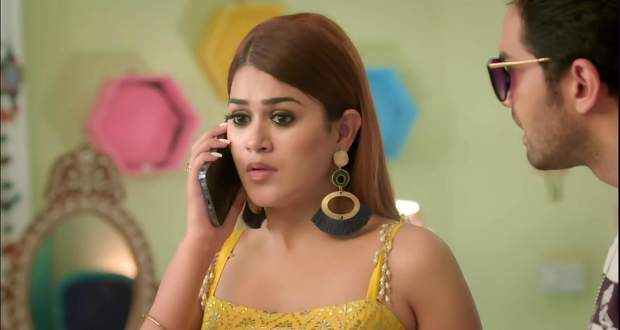 Today's Meet 26th July 2022 episode starts with Manushi trying to lure Manjiri to accept Meet Ahlawat's offer saying that she will not get a better offer than him and that others guys may not even accept her.

Manjiri acts emotional while Manushi tells her that she can marry Meet Ahlawat and later divorce him along with getting a huge sum of money.

Manjiri acts surprised and praises Manushi while Manushi thinks that she will extort all the money throught Manjiri and will get her final revenge on Meet Ahlawat.

At the same time, Meet Hooda sits beside Manushi and thinks that she will intentionally go with Manushi's plan to gain her truth and get to her baby.

Manushi gets a call and and she leaves to attend to it while Meet Hooda eyes the bowl of kheer and goes towards it.

However, before Meet Hooda can take it, Manushi returns and Meet Hooda acts as praying to the God.

Later, Manjiri meets up with Popat Bua and reveals how she is upset that she couldn't see her mother.

Just then, Manjiri notices two poor kids looking through the garbage for food and feeds them samosas.

Further, Manjiri gets them new clothes while Popat Bua sees her and feels pity.

Later, Meet Ahlawat is decorating the swing while the Ahlawat family is talking about celebrating Hariyali Treej.

Babita informs the rituals to Isha while Manjiri thinks that she has also kept a fast for Meet Ahlawat.

Meanwhile, Ram and Ragini get worried as Deep's mother is ignoring their calls and wonder if they will keep the marriage.

Elsewhere, Deep sees the calls and tells his mother to pick up the calls but she tells him to be patient.

Ram again calls and Barti Devi picks up the call after which Ram tells him that he will give her Lakshmiji's gold Idol.

Later, while Manjiri is distracted, Meet Ahlawat gets permission from Sunaina to let Manjiri sit on the swing first.

Babita wonders what Meet Ahlawat is planning while he tries to talk to Manjiri and get her to sit in the swing.

Meet Ahlawat further insults Meet Hooda saying that she always used to jump around like a monkey.

Further, Meet Ahlawat holds Manjiri in his hands and flirts with her saying that she has changed his whole life.

However, before Meet Ahlawat can lift her in his hands, Manjiri shouts that she is Meet Hooda.

© Copyright tellybest.com, 2020, 2021. All Rights Reserved. Unauthorized use and/or duplication of any material from tellybest.com without written permission is strictly prohibited.
Cached Saved on: Friday 30th of September 2022 11:32:19 PMCached Disp on: Saturday 1st of October 2022 12:54:43 AM