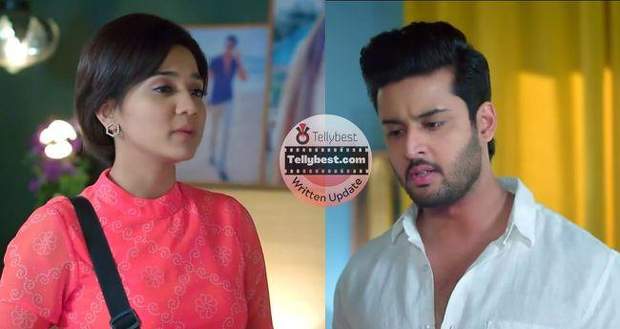 Today's Meet 26th November 2022 episode starts with Ishani talking to someone on call and giving them directions that the other person is not able to understand.

Just then, Ram comes there and takes the phone from her to give the person on the other side the proper instructions.

Ishani gets curious seeing Ram's nice behavior and questions him about it to which he tells her that it is better to save some relationship by swallowing one's anger and hatred.

He gives her a pat on the shoulder and leaves while Ishani wonders what she did that made him act nicely towards her.

Ragini comes there and also says that she is wondering the same thing.

She tells Ishani that she thinks it might be because Ram has realized that they need to find the reason behind mistakes to solve them rather than get upset over them.

Meanwhile, Ram is overhearing their conversation as he thinks to himself that he has to get the name of Ishani's father from her phone at any cost.

After some time, Ishani greets her friend Pratap who tells her that he contacted her cause he realized that someone who broke his heart and left him is also in the same area as her.

He asks her if she would help him find that girl and she agrees while Pratap brings out a picture of him and Neelam.

However, before Ishani can see the picture, she gets a call and leaves to attend to it while Pratap hears some noise and goes inside.

He goes towards the door where Neelam is locked and is about to open it when Meet Hooda comes there and stops him.

Meet Hooda is about to interrogate him when Ishani comes there and informs her that Pratap is her friend.

Further, Meet Hooda apologizes to Pratap and Ishani tells him to give the picture of the girl to Meet Hooda.

Meet Hooda gets called by a servant and she leaves taking the picture and telling them that she will take a look at it later.

Later, Ishani and Ragini are in the kitchen while Ram thinks that he has to get Ishani's phone at any cost to find out who is Ishani's father and if he can consider her as a part of the family or not.

Ram comes to the kitchen and starts praising Ishani for helping Meet Hooda save Meet Ahlawat.

A flashback shows Meet Hooda showing a picture to Meet Ahlawat telling him that she will make Neelam see this picture and will see her reaction to figure out whether it is really Neelam or if it is Laila acting like Neelam.

Later, Meet Hooda plays a drama and opens the door to Neelam's room while talking to Ishani about the sketch.

The sketches fly away and go to Neelam who picks up the sketch and starts sweating after seeing the sketch.

However, she takes up the sketch and gives it back to Meet Hooda while asking her who it is.

Further, Neelam requests Meet Hooda to send her back to the hospital while Meet Hooda says that it is not her fault and that they will surely find the culprit who helped Laila and will even find the anecdote to the poison.

In the present, Meet Hooda goes to Meet Ahlawat and talks to him about the plan she did for Neelam but not finding any reaction from her.

Meet Ahlawat tells her that he is not worrying since he knows she will save him and smiles up at her.

At the same time, Raj is trying to contact all the doctors and higher authorities from around the world to try and get an anecdote about the poison that has been injected into Meet Ahlawat.

On the other hand, Meet Hooda goes to Neelam and tells her to not worry since she has found an idea on how to get the anecdote to the poison.

Neelam gets excited as Meet Hooda tells her that she has gotten the medical waste from the hospital and will surely find the empty bottle of the poison that was injected into Meet Ahlawat's body.

© Copyright tellybest.com, 2022, 2023. All Rights Reserved. Unauthorized use and/or duplication of any material from tellybest.com without written permission is strictly prohibited.
Cached Saved on: Saturday 26th of November 2022 11:29:56 PMCached Disp on: Thursday 1st of December 2022 02:00:09 AM