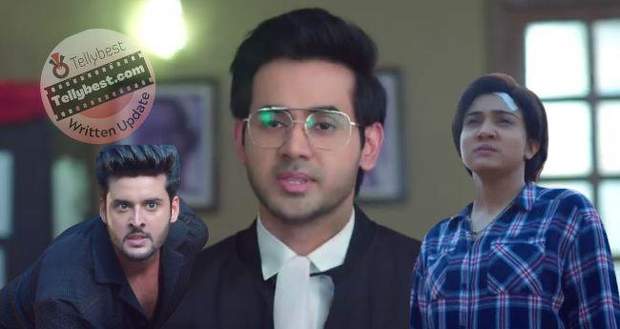 Today's Meet 27th December 2022 episode starts with Meet Ahlawat finally managing to save the car from colliding with the truck.

However, Meet Hooda gets injured and Meet Ahlawat tells her that they need to have it checked by the doctor.

Meet Hooda tells them that they will not be able to meet with the agent if they leave.

Meet Ahlawat tells her that there is nothing more important than her and takes her to the hospital.

On the other hand, the terrorists continue to drive away from the police jeep while the blood seeping out of their boss's stomach makes them worried.

At the city hospital, Meet Ahlawat keeps on getting calls from the agent while Meet Hooda tells him that he should go and meet with the agent while Ragini will be with her.

Meet Ahlawat is hesitant while Meet Hooda assures him that he can pick them up from the hospital afterward or they can take a taxi too.

At the same time, the lady goon tells the driver terrorist that a hospital is just behind and they drive towards the hospital.

Meet Ahlawat leaves the hospital when he collides with the lady terrorist but doesn't think much of it.

Meet Hooda is getting her wound treated while the head tells his right hand that they should escape as the police can catch them anytime.

However, the right-hand says that he has a plan and reveals that they will hijack the whole hospital along with him getting jailed.

The security guard asks the terrorists to write down their names while the right-hand aims his gun at him and threatens him.

All the other terrorists also pull out their guns and force everyone inside the hospital into submission.

Meet Ahlawat feels worried about Meet Hooda for some reason and thinks to go inside.

However, he recalls Meet Hooda telling him to trust her and goes back to the car.

On the other hand, the terrorists hear the police sirens and get worried while the police team gets out of the jeep and walks toward the hospital entrance.

The right head forms a plan and hides the dead body of the security guard he just killed and tells the hostages to act normal.

He threatens a pregnant lady sitting beside Meet Hooda while Meet Hooda speaks up and says that they will oblige.

The terrorists hide while the police come there and start asking the people inside the hospital about the terrorists.

Everyone lies that they did not see the terrorists while the police officer sees blood on the chair and starts asking about it.

Meet Hooda lies that a blood pouch was mistakenly broken by the ward boy.

The police are leaving when they hear a sound coming from the room where the head and the right hand are hiding and go to open it.

When they don't find anyone inside, the police exit the hospital while the right hand and the head are hiding in the corner beside the door.

Meet Hooda finds a ball and writes help on it after which she throws it out of the hospital hoping that a police officer catches it.

On the other hand, Meet Ahlawat realizes that he has forgotten the file at the hospital and goes back.

© Copyright tellybest.com, 2022, 2023. All Rights Reserved. Unauthorized use and/or duplication of any material from tellybest.com without written permission is strictly prohibited.
Cached Saved on: Wednesday 25th of January 2023 10:08:07 AMCached Disp on: Sunday 5th of February 2023 03:24:53 AM