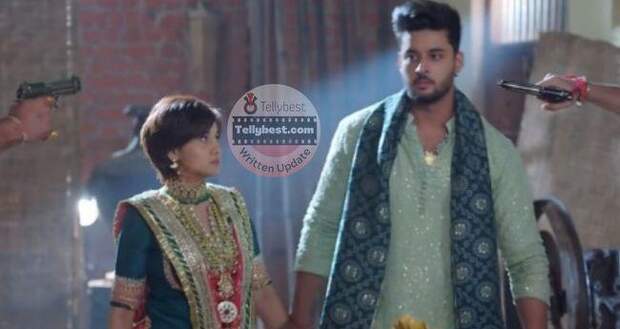 Today's Meet 27th January 2023 episode starts with Babita crying and pouring her heart out to Raj saying that just because of Meet’s stubbornness, Manmeet lost his hand and also the chance to participate in the Olympics.

Meet overhears this conversation and thinks to herself as she knows how painful it is to lose one’s dreams.

After a while, Meet goes to the hospital and pampers Manmeet by taking care of him and feeding him.

Manmeet is putting up his A1 acting game in front of Meet by looking into the space with a constant sad expression.

Meet continues to make him happy by playing riddles like which vegetable is the brother of Virat Kohli but when Manmeet does not answer, Meet herself answers happily and says Broccoli.

The next day, Manmeet videocalls Meet and Babita and tell them that he can’t live anymore as his dream meant the world to him and now, he has no reason to live.

He says that he will write Sarkar’s name in his suicide note so that it does not trouble Meet and her family after Manmeet’s death.

Meet and Babita rushes to the hospital to save Manmeet before it is too late while Manmeet hangs up the phone and starts laughing along with Sarkar.

Sarkar praises Manmeet for his cunning mind to which Manmeet replies that he has shot an arrow of love and will not let it miss the target.

After some time, Manmeet spreads combustible oil around him and starts counting backward from 10 while Meet is running with every ounce in her body to reach Manmeet in time.

Manmeet lights the fire all around him in a circle and stands still while Meet arrives and starts putting the fire out.

Meet slaps Manmeet twice and pulls him out of the fire while constantly shouting at him.

Meet says that she has talked to a very big doctor in Delhi who can treat him but Sarkars enters at the same moment with many trophies and says that fake promises cannot make life better.

She states that Manmeet will win a medal because a wounded Lion is still the king of the jungle.

Sarkar asks Manmeet to pick up a mace to see if he still has his arm strength while Meet motivates him to do so.

Manmeet does pick the Mace up single-handedly after which Meet says that it is a promise to herself that she will be at Manmeet’s side forever and treat his hand.

Sarkar says that Meet will only show affection towards Manmeet for two days after which she will go back to living her own life.

Babita enters too and holds Meet’s hand tightly to take her elsewhere.

She tells Meet that her stubbornness has let Manmeet lose his hand and Meet is somehow responsible for Meet Ahlawat’s death.

Babita says how cruel it is for Meet not to see Manmeet’s tears and pain, she also says that it is because of Meet that Babita lost her son and now she has to marry Manmeet to pay her debt.

After a while, Meet and Babita go back to Manmeet and Sarkar when Meet says that she will marry Manmeet and surrender her life to make Manmeet’s dream come true.

© Copyright tellybest.com, 2022, 2023. All Rights Reserved. Unauthorized use and/or duplication of any material from tellybest.com without written permission is strictly prohibited.
Cached Saved on: Saturday 28th of January 2023 12:03:49 AMCached Disp on: Thursday 2nd of February 2023 07:47:56 PM