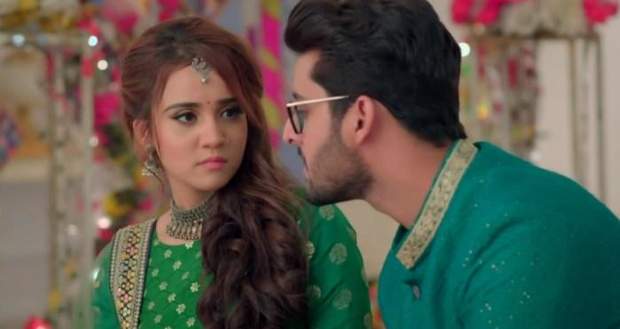 Today's Meet 27th July 2022 episode starts with Meet Hooda bursting out on Meet Ahlawat for being so sweet to Manjari and back bitching about his own wife with some other woman.

Thinking his plan succeeded, he starts laughing but his happiness is short lived when Manjari asks him why is he laughing and then he realizes that he is daydreaming about how he tricked Meet Hooda to accept that it’s her only and not Manjari in that get up.

Manjari shows the Mehendi she applied for Meet Ahlawat and he’s left wondering about why she is blushing so much.

Babita, tells Meet Ahlawat to not play with Manjari’s feelings and stop all the drama of this fake marriage. But he is very adamant on his decision of marrying her and tells his mother that he actually likes her.

He takes up the challenge to outcast Manjari’s real identity as Meet Hooda, and how she has been fooling everyone, all this while.

Manjari asks him to kiss her if he wants her to sit with him for the ritual, and he is shocked to know all this. She flirts with him and tells him how delighted she is to be with him.

To make her believe that he loves her for real, he tries to kiss her forehead but is unable to and doesn’t let her kiss him too.

Babita and Raj discuss which ornament to give Isha since it's her first ‘Teej’ and Ram visits him with Ragini.

Raj tells him he can keep all the jewellery in his bank locker. Raj is excited to meet Barfi Devi Ji and Babita ensures him that she will definitely make him meet her.

Barfi Devi arrives at the Ahlawat’s with her son, Deep and the whole family welcomes them wholeheartedly.

She, in-front of everyone, tells she’s here for the Laxmi, which she is referring to the deal made with Ram and Ragini and also takes a dig at Babita’s daughter-in-law, Meet Hooda running off.

Meet Ahlawat and Deep discuss the further projects and request him to let him be in the team for this new project.

Barfi Devi tries to criticise Manjari by calling her a beggar who agreed to be someone’s wife for money and humiliates her in-front of everyone by feeding her the sweets she specially bought for the beggars.

© Copyright tellybest.com, 2022, 2023. All Rights Reserved. Unauthorized use and/or duplication of any material from tellybest.com without written permission is strictly prohibited.
Cached Saved on: Wednesday 25th of January 2023 10:44:33 AMCached Disp on: Thursday 9th of February 2023 08:51:24 AM