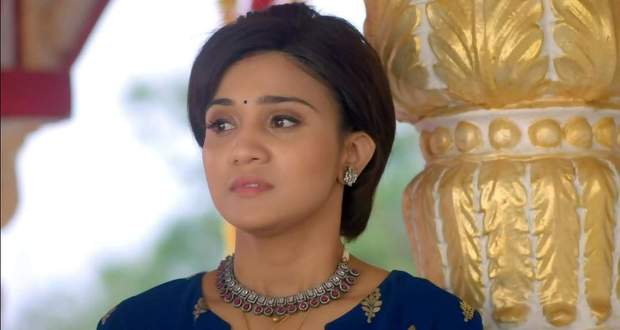 Today's Meet 28th April 2022 episode starts with the Ahlawat family entering the temple and taking Isha with them.

Meet Hooda tries to stop Meet Ahlawat but feels guity after Meet Ahlawat shouts at her asking what was she thinking.

Babita raises her hand to slap Meet Hooda but stops herself saying that she has no relation with her.

Furthermore, Babita tells Meet Hooda that it is in her blood to help people in eloping from marriages.

Meet Hooda cries while Babita tells her to not return to Ahlawat house until after Isha’s wedding and leaves followed by the whole family.

Meet Hooda wonders what wrong she did when she was just thinking about the good of Isha and the whole family.

Masoom insults Meet Hooda for shamelessly entering the house again when Raj sharply looks at her and tells her to remember who this house belongs to.

Raj says that all the family matters have been solved inside the house till now and that Meet will not go anywhere.

Angered by Raj’s decision, Babita tells Raj that she will not be responsible for insulting Meet Hooda then while Raj tells Meet Hooda to return to her room.

Meet Hooda recalls Babita and Meet Ahlawat’s anger directed towards her when Deep calls her and they form a plan.

Raj tells Meet Ahlawat that he should support his wife in any situation while Babita tells him that it is his responsiblity to control Meet Hooda from now on.

At night, Deep comes outside the Ahlawat mansion with a drink in his hand and shouts for Isha while the whole family comes there.

Deep calls Abhay and tells him that he and Isha are in love while Meet Ahlawat and Tej try to stop him.

Abhay tells Meet Ahlawat that he is coming to talk while Deep is kicked out from the Ahlawat mansion.

© Copyright tellybest.com, 2020, 2021. All Rights Reserved. Unauthorized use and/or duplication of any material from tellybest.com without written permission is strictly prohibited.
Cached Saved on: Monday 3rd of October 2022 11:22:35 AMCached Disp on: Friday 7th of October 2022 08:39:46 PM