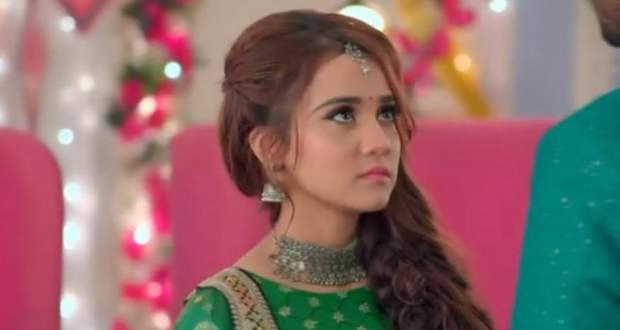 Today's Meet 28th July 2022 episode starts with Manjari outsmarting Barfi Devi by not eating the sweets she bought for the beggars and which triggers her.

Babita asks her not to ruin her own mood because of Manjari’s behavior but she is adamant on her decision.

Manjari plays an act of fainting, leaving the family worried about her.

When she gains consciousness, Babita tells Meet Ahlawat to feed something sweet to Manjari as she would feel better.

Barfi Devi is still unable to feed sweets to Manjari that she bought to humiliate her.

On the other hand, Manjari mocks her by telling that she too is a beggar because even though she is wealthy, she still has demanded dowry.

Barfi Devi asks Deep to leave with her as she feels insulted and the Ahlawat’s continue with the Pooja.

All the women, including Manjari, complete their fast on a happy note.

Later on, Manjari returns the friendship badge to Manushi and tells her that she cannot marry Meet Ahlawat which leaves her raging.

She then cools down and asks Manjari to relax and share why she is refusing to marry him.

Manjari tells she can’t be selfish and won’t marry until she helps to find a kid for her aunt, Popat.

Manushi asks Manjari to reconsider the decision as it can be a life changing decision for her.

Afterwards, Manjari comes and hugs Popat Bua and pours her heart out and tells her how she has failed in trapping Manushi.

She is heartbroken and loses hope of winning her child back. Popat motivates her and tells her not to lose hope and stay strong as it's just a matter of time.

While talking to Popat, Manjari remembers the ‘Kheer’ that Anubha makes for her and feels it is going to give her the courage to continue her fight.

She also realizes how much she has hurt Anubha by disappearing and how it's the same thing she is going through, now. She understands the pain of losing one's own child.

She feels only after apologizing to Anubha, would she be able to succeed in her plan and thus, decides to go to see Anubha.

However, she is unaware that Meet Ahlawat saw her going out late at night. And he instantly calls his Hoshiyar and asks him to come to his location as soon as possible.