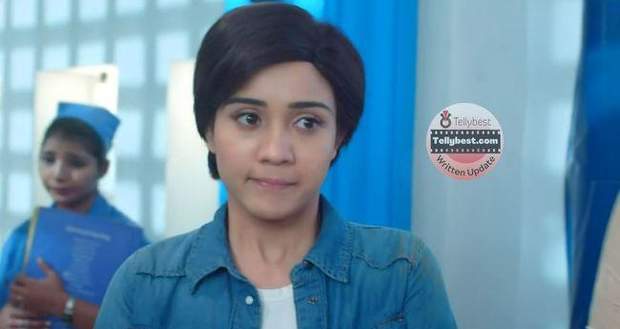 Today's Meet 29th December 2022 episode starts with Meet at the gunpoint when Meet tells the terrorist to kill everyone if he wants but reminds him that he is only alive as long as they are alive and the moment he kills them his game will finish as well.

Meet bravely put the gun on her head and tells the terrorist that she is the daughter of a martyr and not a coward like him.

Meet Ahlawat thinks of the terrorist attack and remains quiet.

Elsewhere, the terrorist tells his mates that Meet Hooda is going to be very useful in future.

After a while, he instructs others to send a nurse and a ward boy to an OT and lock others in another room.

Meanwhile, Meet Ahalawat tells his family that Ragini will be staying at Meet Hooda's mother's house with her today on her insistence.

Babita tells Meet Ahlawat that she has arranged a Maha Pooja for Meet Hooda and Meet Ahlawat so their Marital bond can grow strong.

In the meantime, the terrorists are driving the hostages to the room when Ragini scolds Meet Hooda for provoking the terrorist.

However, Meet Hooda tells her that their family’s prayers are with them and nothing will happen to them now.

Elsewhere, Ishani shows the dress and jewellery and the dress that Meet Hooda will have to wear in veneration.

Meanwhile, Meet Ahlawat is thinking about finding a secret way to get Meet Hooda free from the hospital.

He takes the dress and jewellery and goes to his room while Rajwardhan observes Meet Ahlawat’s worried face and becomes curious.

Meanwhile, the terrorists are being cruel to the hostages and when a woman requests the lady goon to stop she gets thrown by the terrorist and her labour pain begins.

At the hospital, Meet Hooda asks everyone if there is anyone here who is a nurse or ward boy and has experience in delivery.

Meanwhile, Meet Hooda tells everyone that they have to unite together against the terrorist but their first challenge is to deliver Chanda’s baby without the terrorist’s knowledge.

In the meantime, Meet Ahlawat vows to bring Meet Hooda back safely before veneration.

After a while, Meet Hooda assures Chanda that they will bring the baby to the world alive.

At home, Rajvardhan comes to Meet Ahlawat's room asking him what is he hiding and if he and Meet Hooda had a fight.

Meet Ahlawat tells Rajvardhan that his life experience has taught him Meet Hooda’s importance in his life and assures him that everything is alright between them.

Meanwhile, Ragini is scared for Chanda and tells Meet Hooda that they need a doctor as the child is not coming out.

However, Meet Hooda tells Ragini that babies use to be born long before there were doctors and they will also succeed in delivering the child.

Later, Ragini tells Meet that the doctor used a vacuum pump when she faced a similar problem.

Meet Hooda finds the vacuum cleaner in the room and tells Ragini that she will use it as a vacuum pump and will handle its pressure.

Meanwhile, Meet Hooda is searching for a secret passage that is not in the blueprint of the hospital and remembers it being at Madhuban Palace and finds the secret passage in its blueprints.

Later, Chanda wakes up to be happy to have a healthy baby.