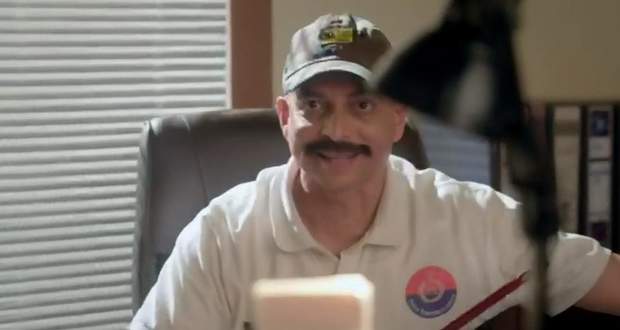 Today's Meet 2nd April 2022 episode starts with Hawa Singh lying to Meet Hooda that no female uniform is available in the storage so she has to go to drill in the clothes she is wearing at the moment.

As Meet Hooda snarkily looks at Hawa Singh, her gaze gets caught by the tablecloth which she further uses to make the sweatpants for herself.

Hawa Singh mocks Meet Hooda that all her hard work went in vain as she has gotten late for the drill which is going to begin at 10 A.M. sharp.

Meet Hooda takes up the challenge to cover the five minutes distance within three minutes.

Meanwhile, following Hawa Singh’s orders, Verma creates obstacles in Meet’s path so that she couldn’t reach the ground on time.

However, Meet Hooda dodges all the obstacles and reaches the ground on time when Hawa Singh completes his back count.

As the PT starts Meet Hooda deliberately kicks Hawa Singh, making him fall into the pool of mud due to which he gets dirt all over himself.

Smirking, Meet Hooda offers help to Hawa Singh and lowly comments to him that now he has tasted dirt only, however, he will be behind bars when she will become a police officer.

On the other hand, Ram Singh Ahlawat is conspiring against Meet Alhawat to send him to jail with false accusations which will make Meet Hooda leave the police training herself.

Hawa Singh discusses his plan with Ram about how Meet Hooda will get hurt the next day during the training.

Meanwhile, Meet Hooda goes to meet Meet Alhawat who thinks that he is imagining Meet there.

However, Meet Ahlawat realizes that Meet is actually present there when Meet Hooda pushes him as he goes to kiss her.

Both Meet Hooda and Meet Ahlawat wish each other the best for the next day and both of them spend some time together.

Hawa Singh announces that the health of the trainees had deteriorated due to the expired medicines of the Ahlawat Pharmacies.

Meet Hooda refuses to believe that Meet Ahlawat can take part in such a scam and tries calling him repeatedly.

Meanwhile, protestors flog in front of the house of the Ahlawats and demand compensation for the health hazards caused by the medicines of their company.

Meet Ahlawat comes to check upon the sick children but gets shoved out by the parents who accuse him of causing harm to their children.

Suddenly, journalists ghost Meet Ahlawat out of nowhere and begin questioning him about his scam through the medicines.

Ram suggests that Meet Ahlawat run away from there so that he can save himself from the allegations of the fake medicines.

On the other hand, Meet Hooda attempts to get out of the police academy when Hawa Singh stops her saying to step out of the gate if she wants to get rusticated.

Meet finds herself in a dilemma as she thinks of what to choose between her love and her duty.

However, Meet Hooda decides to rush to Meet Ahlawat at last which sparks victory in Hawa Singh’s mind.

Back at Ahlawat’s, Meet Ahlawat decides to face the situation head-on after remembering Meet Hooda’s words and refuses to go with Ram.

Babita suggests that they should call her brother for help but Rajvardhan refuses at once.

Due to stress, Babita faints suddenly with Meet Ahlawat and others carrying her inside the house.

At last, Babita calls her brother, Abhay Rana, for help who stops the police outside through his power as the minister.

As Meet Hooda was about to step outside the gate, Meet Ahlawat calls her and asks her not to leave her dream because of him.

Later, Meet Hooda participates in solving a demo case and wins it so that she can ask for a holiday from the instructor.

However, the instructor asks Meet Hooda to assist him as a reward which breaks off all dreams of her going to home.