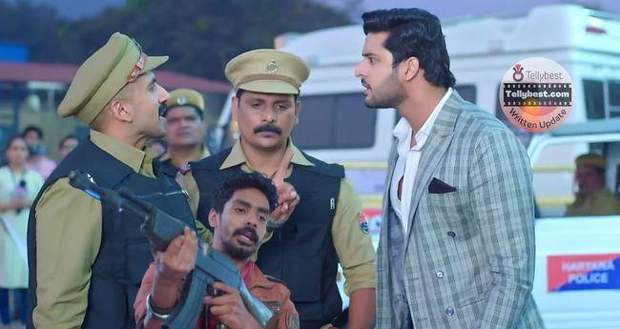 Today's Meet 2nd January 2023 episode starts with Meet Hooda escaping the eyes of the terrorists and calling Meet Ahlawat but he could not pick up the call as is driving, and his phone is on silent.

Meanwhile, the male goon who wanted to marry Meet finds out that Meet is missing from the crowd and grows impatient.

He goes to the girl who has hidden the phone earlier and points the gun at her forehead and asks about Meet's whereabouts.

The girl shivers in fear and tells him that she saw Meet sneak into the storeroom.

Back at the storeroom, Meet Ahlawat finally sees the missed calls and calls back at the telephone but as soon as Meet Hooda answers the phone, she hears someone entering and thus hides the phone.

The male goon enters and finds Meet standing idly and asks Meet what she is doing there.

Meet replies that since he wants to marry her, she decided to do some preparations forehand and that's why she came to the storeroom.

The male goon listens to her lovingly, but the chief arrives and says that no one should trust Meet since she tried the fool them twice in 2 hours and also that she is already married.

Meet Hooda replies that she wants power since the world revolves around those who have power in their hand and because of that she chooses to marry the goon.

To make her story more believable, she says that she was already finding an excuse to end her previous marriage.

The chief and the others are convinced by her answer.

Meanwhile, Meet Ahlawat finally finds the manhole which was depicted on the map that leads into the secret tunnel but when he goes closer to it, he gets caught by a police guard.

The police guard asks to show what is in his bag but as soon as Meet Ahlawat starts opening the bag, a drunkard arrives and diverts the attention of the guard. Meet takes advantage of the situation and finally gets into the manhole.

The manhole is completely dark from the inside and suffocating too but the memories of Meet Hooda keep him going.

Back at the hospital, Meet Hooda tells the goon that she is going to freshen up for the wedding.

As Meet enters the washroom, she finds Ragini already hiding there and tells her that she has a plan.

Meet tells Ragini that when she went to the storeroom, she picked up sleeping medicine for the terrorists.

The lady goon enters the washroom while Ragini hides. She asks Meet what she is doing.

Meet tells her that she needs to have at least sweets for the ceremony.

The male goon arrives and asks Number 1 to go and bring the ingredients for making the sweets.

Ragini and the other ladies start making ladoos while Ragini starts putting the sleeping medicine in the mixture, but the lady goon catches her.

Meanwhile, Meet Ahlawat on his way into the manhole finds a snake hissing at him and takes a back in surprise and fear.

© Copyright tellybest.com, 2022, 2023. All Rights Reserved. Unauthorized use and/or duplication of any material from tellybest.com without written permission is strictly prohibited.
Cached Saved on: Wednesday 25th of January 2023 11:36:44 AMCached Disp on: Monday 6th of February 2023 02:58:38 AM