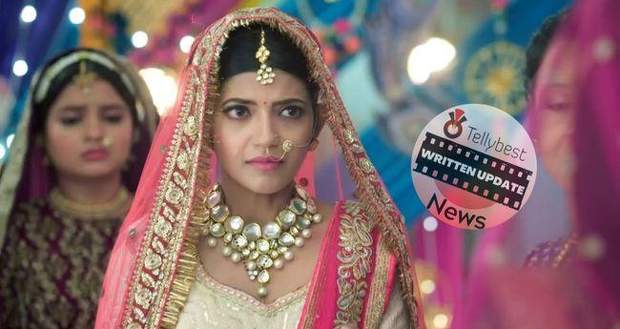 Today's Meet 2nd September 2022 episode starts with Raj entering the house and raising his hands to bless Meet Ahlawat and his wife standing beside him.

However, he soon notices that Meet Hooda is descending the stairs with her luggage and gets confused about the girl standing beside Meet Ahlawat.

Meet Hooda notices Raj and calls out his name which catches the attention of the whole family.

At the same time, the divorce papers fly off due to the wind and land right before Raj's feet.

Meet Ahlawat tells Raj that he was about to explain but Raj slaps him and tells him that he is ashamed of him.

Raj questions Meet Ahlawat about how he could even think of divorcing Meet Hooda, the girl who risked everything to save him and proved every time that she was a part of the Ahlawat family.

Just then, Barfi Devi interjects and says that Meet Hooda is an outsider while the real family is his son Meet Ahlawat only.

With guilt-filled eyes, Raj says that it is true and that is why he wishes to remove every blood cell from his body so that he doesn't share the same blood as his son, Meet Ahlawat.

Finally, Raj drags Meet Ahlawat towards the main door and tells him to get out of the house.

However, Barfi Devi stops him and tells him that it is he who should leave the house and not Meet Ahlawat.

Further, making a show, Barfi Devi tells Raj that Tej has lost everything in business but it was Meet Ahlawat who did hard work and took back their business.

Meet Ahlawat tells Barfi Devi to not talk rudely to his father but Barfi Devi warns him with her cryptic words by saying that she is only saying the truth that will help him.

Raj acts emotionally and states that Barfi Devi is right and that he should make a decision with not only his heart but with his mind too.

However, Raj goes backwards before Meet Ahlawat could touch his feet and puts his hand over Meet Hooda.

Raj states that it is true he cannot stay with his son and tells Meet Hooda that he is replacing her as his son from now on.

Holding Meet Hooda's hand, he goes to the temple after which he removes the dupatta from Meet Hooda and ties a turban on her head stating that she is Ahlawat family's 'Bahu Beta' from now on.

© Copyright tellybest.com, 2020, 2021. All Rights Reserved. Unauthorized use and/or duplication of any material from tellybest.com without written permission is strictly prohibited.
Cached Saved on: Sunday 2nd of October 2022 03:46:09 AMCached Disp on: Wednesday 5th of October 2022 05:50:00 PM