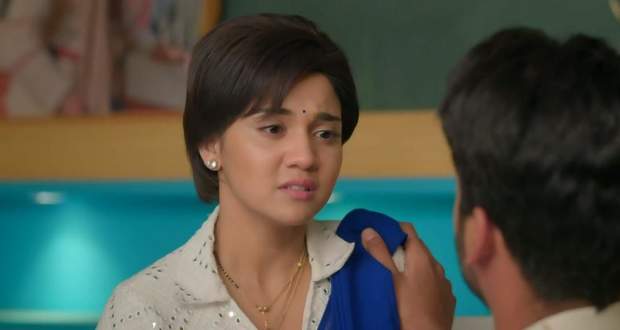 Today's Meet 30th April 2022 episode starts with Meet Ahlawat making Meet Hooda sit in a chair and sitting in front of her with an impassive expression.

He asks her why she is trying to hinder Shantanu and Isha's marriage.

Seeing no way out of this, Meet Hooda tells the truth that she just doesn't want Isha to end up with someone like Shantanu when Meet Ahlawat stops her.

Meet Hooda insists that Shantanu has an ulterior motive behind the marriage while Meet Ahlawat gets fed up with her excuses.

Meet Ahlawat tells her that she is seeing the situation incorrectly and leaves the room saying that he can not bear to see Meet Hooda's face which hurts her feelings.

The next morning, Meet Hooda is about to leave the room when Meet Ahlawat comes there and apologizes to her for behaving harshly the previous day.

He further makes Meet Hooda sit in a chair and handcuffs her to the armrest of the chair as he talks to her.

Meet Hooda wistfully looks at Meet Ahlawat and requests him to remove the handcuffs as he will regret doing so once he learns the truth.

However, Meet Ahlawat disregards her pleas and leaves from there.

Later, Meet Ahlawat returns to the room with breakfast and feeds his wife while she keeps requesting him to give her two hours to expose the truth.

Having had enough of Meet Hooda, Meet Ahlawat calls her stubborn and leaves the room saying that she doesn't care for the family or its reputation.

Elsewhere, Shantanu drinking with Abhay while praising him for making the Ahlawats look like a bunch of fools.

Just then, Abhay notices Babita and Meet Ahlawat and starts acting which Shantanu realizes and acts with him.

Abhay tells them that they should cancel the marriage if something is still not clear for the Ahlawat family.

However, in a panic, Babita and Meet Ahlawat beg to not say things like that and say that everything is clear.

Putting his evil plan in motion, Abhay tells Babita and Meet Ahlawat that Shantanu is under stress after Meet Hooda alleged him.

Abhay keeps insisting that Meet Hooda will do something at the wedding.

Meet Ahlawat's promise to the family

Just then, Meet Ahlawat guarantees them that Meet Hooda will face his wrath if she does anything again.

Meanwhile, at the Ahlawat house, Meet Hooda is dragging the chair with herself while trying to find a tool to free herself from the handcuffs.

Just then, Shantanu video calls her and mocks her saying that he will keep Isha chained like her.

As the call ends, Meet Hooda manages to get a hold of the toolbox and removes the armrest from the foot of the chair.

Furthermore, Meet Hooda brings the handcuffs out of the chair and leaves the room after writing a message and putting it on the table.

As she is leaving, she hears footsteps and gets scared but heaves a sigh of relief after realizing that it's only Isha.

Isha tells Meet Hooda that she can't let her go as her relationship with Meet Ahlawat is in line.

However, Meet Hooda assures her that nothing will happen to her and her husband's relationship and goes downstairs.

From there, Meet Hooda steals a servant's outfit and changes into it to not be recognized by the family members.

However, as she is holding a basket of garlands to hide her face, she bumps into Meet Ahlawat leading to them getting stuck together by the garlands.

Meet Hooda hides her face with the basket and steals the keys to the handcuffs as Meet Ahlawat untangles them from the garlands.